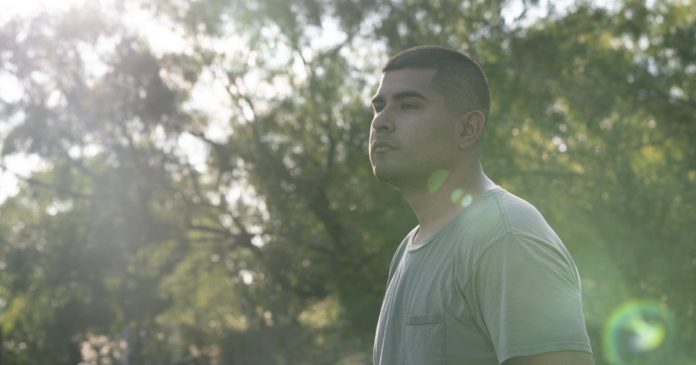 Isolated without Wi-Fi in the rural Hidalgo County home he shares with his dad, Ruben Homar Martinez is determined to graduate from college this December with a degree in criminal justice.

But he’s frustrated as he struggles through his online classes at the University of Texas Rio Grande Valley when he should be sitting in the front row, he said, where he learns best.

He’s having a hard time paying bills and tuition after his hours were reduced at AutoZone due to the pandemic.

And he feels helpless because he lives in a national hot spot for coronavirus, where COVID-19 death rates are among the highest in the country — which means that the situation on his campus is unlikely to change soon.

“I’m determined and willful enough to pass,” said Martinez, 24. “I’m going to do what I have to do. … But I’m angry. My blood is boiling, because I feel like there’s nothing I can do.”

This is the reality of pandemic-era college life in the Texas Rio Grande Valley, a four-county region just north of the Mexican border, where over 90% of the population is Hispanic and residents are at a disproportionately high risk for catching, transmitting and dying from the coronavirus.

At UT-Rio Grande Valley, administrators spent a tense summer preparing for the fall semester while local coronavirus rates spiked, the area spiraled into further economic depression and debate raged across the nation about how to safely send college students back to school.

Ultimately, school officials put 85% of classes fully online in an attempt to keep as many people off campus as possible.

But students like Martinez said that while they feel safer at home, there are big drawbacks to doing it all online, particularly when up to 20% of students don’t have reliable internet, school officials estimated. In fact, Rio Grande Valley cities consistently rank near the top of nationwide surveys of households without internet.

Meanwhile, many students live in multigenerational households, buzzing with activity, that can make it hard to focus on school at home.

“From last year to this year, my life has become completely different at this point,” said student Giselle Castillo, 20, of Donna. “I think we’re all going through a major change. We all still struggle, and we’re all struggling together.”

This summer, COVID-19 deaths jumped from 49 total for the Rio Grande Valley in early June to nearly 900 two months later, and jumped more than 1,000 again in the month of August.

Meanwhile, UT-Rio Grande Valley President Guy Bailey and his fiancee got the news that one of their grandchildren, age 6 months, was diagnosed with COVID-19, along with the child’s parents — one of whom was hospitalized.

It served as a disturbing reminder to Bailey of what many of his students and employees could be dealing with this year.

“As we were doing our planning and communicating with our students, we were seeing firsthand exactly what happens,” said Bailey, who cared for the infant for five days with his fiancee at home, while the parents recovered. “I know many of our students have been in the same situations.”

A 100-person task force formed over the summer and carefully weighed the outsized dangers that the coronavirus poses to the 90% Hispanic student population, and the unique risks of reopening a campus in the Rio Grande Valley.

“People here tend to live in very close settings, they tend to congregate, and they like to be socially active in very close settings,” said Dr. John H. Krouse, dean of the university’s medical school and leader of the task force. “But on top of that, we [Valley residents] have really high rates of diabetes and obesity and other chronic diseases, which is why the Valley has such a disproportionate number of deaths given the numbers of positive cases.”

UT-Rio Grande Valley, the only four-year university in the Valley, has two main campuses, whose students are mostly commuters. In total, there are about 32,500 students.

The Edinburg campus sits in a county that tops the nation in diabetes and hypertension rates, where the COVID-19 death rate is four times the national rate.

Its Brownsville campus, an hour away, is located in Cameron County, which is trying to stem a surge and has been locked for weeks in a war of words with the Texas attorney general’s office over how far it can go to keep the virus from spreading.

The situation is similar throughout the Rio Grande Valley, which also includes Harlingen and McAllen, among other cities.

The region operates as one large entity, with residents often working in one county, living in another and visiting family or going to school in a third, said Dr. Ivan Melendez, public health authority in Hidalgo County and a local physician.

“This isn’t Austin. This isn’t Dallas,” Melendez said. “What I’m saying is we have a high-risk population.”

The Centers for Disease Control and Prevention said in a late July report that Hispanics are disproportionately affected by COVID-19 for a number of reasons: systemic discrimination, lack of access to and use of health care services, a higher proportion of front-line jobs and a cultural predisposition toward living in multigenerational households, which increases exposure risk to vulnerable elderly.

One in 10 families in Hidalgo County has at least three generations living in the home, and one out of every three bedrooms sleeps more than one person, Melendez said.

“Our primary mode of transmission, as opposed to A&M or University of Texas, is not going to be from parties,” Melendez said. “It’s going to be from family-to-family transmission. So the kids could get it at school, at whatever event, and then bring it home to their parents and grandparents. Those are the ones we’re really worried about.”

Castillo lives with one set of grandparents, both her parents and, until recently, her brother, who just left for college in Austin.

Her father works two jobs, and both her mother and her grandfather work, all of them outside of the home. All of her classes are online, and she works full time at a lumber shop.

“It was a little scary for us because of my grandparents,” she said. “They are our main priority in the house because they’re oldest, and they’re more vulnerable to the virus.”

Krouse said home situations like Castillo’s were at the top of administrators’ minds when they began to craft their policies, both before and throughout the summer spike in cases.

“It is that sense of responsibility for one’s family, which is part of the Hispanic culture, and I hear that all the time,” Krouse said. “It is part of what we hear on a daily basis, and we respect those kinds of things.”

Although hospitalizations and daily COVID-19 deaths are down between 60% and 80% from where they were in July, Melendez worries about another spike a few weeks after Labor Day weekend and says the area is far from safe from the virus.

The school administration mandated masks and banned social gatherings, sports, club meetings, concerts and spirit events. It moved all classes with over 50 students online and allowed teachers to opt out of teaching in-person classes if they could be taught online, leading to just 15% of classes at the university’s two campuses being in person or hybrid this semester.

“You’re really only talking about a couple hundred students on campus at a time, and that’s how we’ve been able to stay safe,” Krouse said. “If you look at the campus parking lots, they are by and large empty.”

The payoff, university officials say, is that the school has reported 108 cases among UT-Rio Grande Valley students, campuses and staff since mid-June. Some 80% of the total cases were reported before the end of July, according to a dashboard maintained by the university. Last week, there were no new reported cases among the school’s students, faculty or staff who had been on campus either to work, live, attend class or use services. Off-campus, 13 tested positive out of 75 tests administered.

“If there were big spikes, we could move everything 100% online, and we are prepared to do that if we have to,” Bailey said. “We did it in the spring, but we’d be much better prepared this time.”

Krouse said so far, the trends don’t indicate a need to move that direction yet.

“We’ve not seen the exponential growth that would make us worry,” he said.

But students say the low case counts, while worth the extra precautions, come at a high price.

For some, spotty internet remains an issue.

Over the summer, all classes were entirely online during the summer session, but campus was never closed, allowing students to use the library and Wi-Fi hot spots in parking lots and the computer lab while observing social distancing rules.

The school also gave $1,000 to students through CARES Act funding, to spend however they needed, with the idea that they could use the money to upgrade Wi-Fi or tech devices to make online school easier if they had connection problem at home.

Martinez said he feels “selfish” for wanting to be on campus but doesn’t see an easy answer to his struggles to learn online, which are hampered by the fact that he has to drive to his mother’s house in Mission to get Wi-Fi.

He goes to campus once a week for swimming classes and would like to do more, but worries about the implications.

“If they open the schools too early, there’s going to be a spike in COVID,” he said. “I love all my professors, to be honest, and the last thing I want to know is that they died of COVID because I wanted to go back to class.”

At the same time, working at home can be noisy and full of distractions.

“I think a lot of Hispanic families are like that,” said mass communications student Fernanda Figueroa, 21. “You have people coming in all the time saying, ‘Hey, you need to do the chores, feed the dog, go get the groceries.’ You just hear everything going on in the background. It’s just not that school environment. It takes you out of the class that you’re in.”

Several students said they feel safer at home than out in public, but they view the online courses and occasional video meetings with professors to be a poor substitute for live classes with experts and networking opportunities.

“It’s heartbreaking because I was hoping to learn all this first-hand knowledge from professors with years of experience and knowledge within the criminal justice system and I lost that,” said Anna Palacios, a Weslaco senior working two jobs and studying criminal justice. “I’m pretty much teaching myself five classes with the guidance of a professor. It’s not the same.”

But Palacios also acknowledged the flexibility has been valuable. She took a full load of classes online over the summer while working two jobs. Then her grandparents and great-grandmother tested positive for COVID-19.

Just before finals, her great-grandmother died. The virtual rosary and the socially distanced funeral happened during her finals week in early August.

“You’re trying to be there for your family and be there for yourself to pay your respects,” Palacios said. “My professors were so nice and so flexible with their assignments, just in case anything like that happened with their students. They were ready for it.”