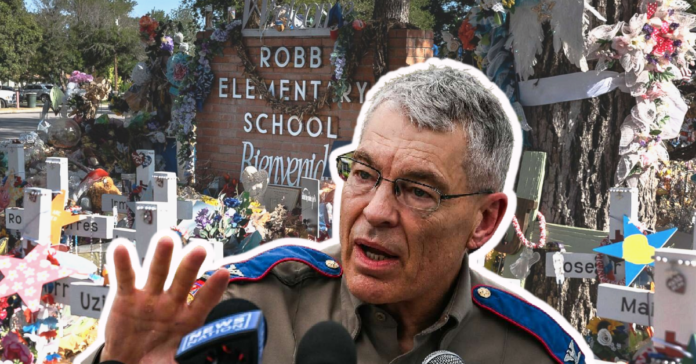 Texas Department of Public Safety Director Steve McCraw faced the families of Robb Elementary School shooting victims last week in a public meeting. Despite admissions of mistakes at the incident which claimed 21 lives and injured 18 others, McCraw defended the agency.

His words did little to mollify the crowd, and McGraw further enraged them when he said he was “sorry for your loss.” The crowd openly called for his resignation. Lives Robbed, a group founded after the killing to push for gun reform and school safety, called the public meeting a “glorified press conference.”

“Today, The Department of Public Safety promised an update into their investigation of the Robb Elementary School shooting,” the statement read. “That did not happen. Instead, in a bait and switch, they hosted a glorified press conference and once again refused to accept responsibility for their failures.”

Since the massacre, DPS has been accused of botching the police response that allowed the shooter to continue his rampage. A report from the Texas House Committee on the crime baldly stated that DPS should have assumed command of the situation, but did not. There were 91 members of DPS on the scene, as well as 149 United States Border Patrol Officers.

“There was an overall lackadaisical approach by law enforcement at the scene,” the report concludes. “For many, that was because they were given and relied upon inaccurate information. For others, they had enough information to know better.”

McCraw did admit that the incident was not adequately treated as an active shooter, and that officers waited too long for equipment like shields before trying to stop the killing. Multiple DPS officers are being investigated for their role in the shooting, and a report is expected by the end of the year. One officer, Sgt. Juan Maldonado, who was the first to arrive at the school, has been fired.

Nonetheless, the public meeting only seems to have made the families of the Robb Elementary shooting angrier. McGraw’s defense of DPS fell on deaf ears. An uncle of one victim called what was being said lies and misinformation, and said that DPS’ deflection was preventing everyone from beginning the healing process.

That there was profound incompetency at Robb Elementary that day no one seems to dispute. However, state agencies from the bottom up have repeatedly passed the buck when it comes to assigning blame for those failures or addressing the next attempted shooting with new policies. Frazzled and contrite as McGraw appeared to be during the meeting, he clearly has no intention of giving up his post, even when it is outright demanded from the survivors of Texas’ worst school shooting ever.