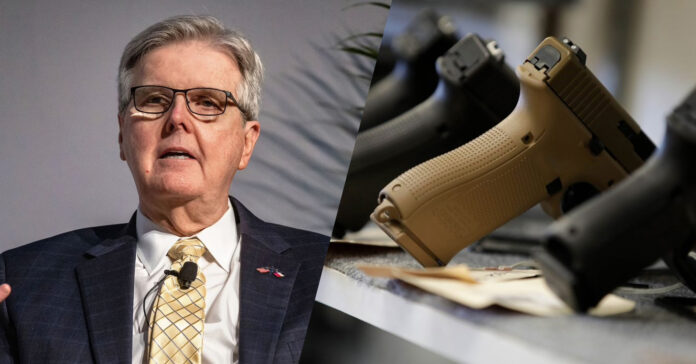 Days after Lt. Gov. Dan Patrick said he did not believe the permitless carry bill had enough votes, the Texas Senate created a new Committee that took the bill as its first task.

House Bill 1927, the constitutional carry bill that would allow people over 21 to carry a handgun without the need of a license or background checks, passed the House last week and has now been referred to the Committee that was created overnight.

Sens. Buckingham, Hall, and Creighton—all members of the new committee—have publicly come out in support of constitutional carry.

With permitless handgun carry being one of the legislative priorities of the Republican Party of Texas and with less than 40 days until the end of the 87th Legislative Session, the outcome of the bill now seems to rely on Dan Patrick.

According to the Houston Chronicle, The Gun Owners of America’s Texas chapter is already pushing its supporters to up the pressure on Patrick and senators to hear the legislation.

On Thursday, Dan Patrick said he was going to take the permitless carry bill to the Senate floor next week and that he intended to work to get the votes to pass it. He added that now that he made some “tweaks” to the bill, including enhanced penalties for people who illegally carry, remove the $40 fee for a license, and a free training course available online, he expected law enforcement to get on board with the soon-to-be law.

According to Dallas Morning News reporter Allie Morris, 12 out of 18 Republicans in the chamber have already committed to vote yes, “I’m still a few short,” Patrick said, but added he was  “optimistic” about getting the rest.