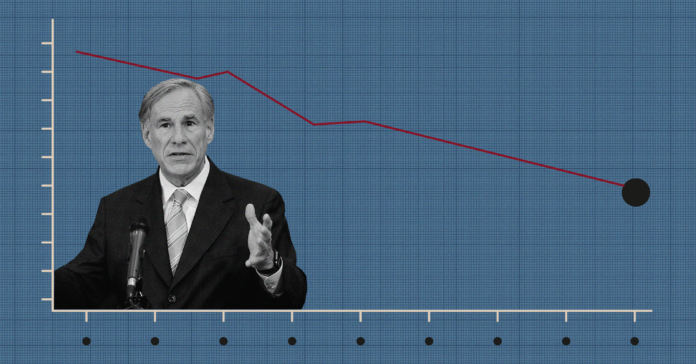 In a TV interview Monday evening, Gov. Greg Abbott dismissed growing requests for another stay-at-home order. He also applied a little revisionist history when he alleged local officials who want new lockdown orders are not enforcing the orders that are already in place.

Abbott said another shutdown would force Texans into poverty.

“They ask for more and more, but they do absolutely nothing. They need to show up, enforce the law as it is, before they’ve given any further authority,” said Abbott on KFDM-TV in Beaumont. “Here’s the reality: Every single one of these executive orders that have been issued were done based upon the advice of doctors to ensure that if these executive orders were enforced as local authorities have had the authority to do so, it would stop the spread of the coronavirus, especially this most recent order.”

All of the state’s major metropolitan areas had orders in place requiring businesses to require customers and staff to be masked before Abbott moved to impose a statewide order. In fact, they had acted on their own when the governor refused to grant their request for a statewide policy.

Abbott has stopped the news briefings he was doing when he began reopening Texas, now preferring one-on-one broadcast interviews. He announced his statewide mask order with a news release and a YouTube video. There was no opportunity for reporters to ask questions.

The change in approach comes as the pandemic worsens in Texas and new polling shows the governor’s approval rating slipping.

According to the latest UT Texas Politics Project poll, Abbott’s overall job approval rating sits at 49% — the first time it has fallen below 50% in the last two years. The new number marks a 7-point decline since April. Disapproval of the governor’s job performance also increased over the last two months, rising from 32% to 39%.

When just his handling of the pandemic is considered, job approval dropped from 56% in April to 49% in June.

“Abbott’s 56% overall job approval in April represented the highwater mark of his governorship, seemingly buoyed by relatively high approval from Democrats, 24% of whom approved of the job he was doing in the early stages of the state’s attempts to grapple with COVID-19,” read information contained in a blog post about the polling. “In the meantime, Abbott reopened Texas, but has since been forced to batten down the hatches when the opening contributed to a resurgence of the virus. His approval numbers among Democrats sagged to 13%, with 74% disapproving — 51% disapproving strongly — the highest disapproval rate among Democrats of his governorship.”

Although still very high, Abbott also saw a decline in approval from Republicans, falling from from 88% to 83%.

While Abbott’s numbers were declining, the job approval ratings of Lt. Gov. Dan Patrick, Speaker of the House Dennis Bonnen, and both U.S. Senators all stayed mostly unchanged between April and June.