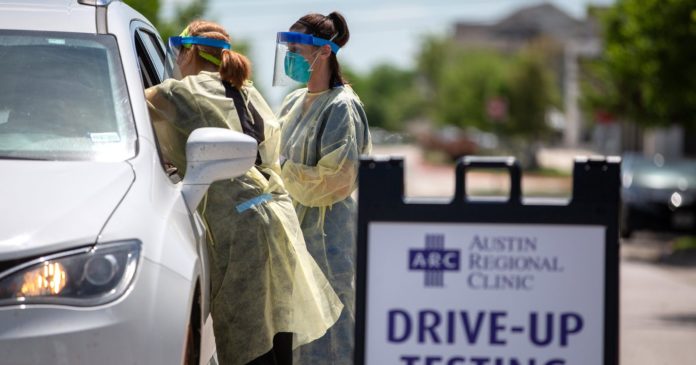 Texas health officials made a key change Thursday to how they report data about the coronavirus, distinguishing antibody tests from standard viral tests and prompting slight increases in the state’s oft-cited daily statistic known as the positivity rate.

The positivity rate is the ratio of the confirmed cases to total tests, presented by the state as aseven-day rolling average. The Texas Department State of Health Services disclosed for the first time Thursday that as of a day earlier, it had counted 49,313 antibody tests as as part of its “total tests” tally. That represents 6.4% of the 770,241 total tests that the state had reported through Wednesday.

Health experts have warned against conflating the tests because they are distinctly different. Antibody tests detect whether someone was previously infected, while standard viral tests determine whether someone currently has the virus.

Now that DSHS is reporting the number of antibody tests, it has recalculated its daily positivity rates starting Tuesday to exclude such tests. That led to a 0.41 percentage-point increase in Tuesday’s rate and a 0.55 point increase in Wednesday’s rate, according to DSHS calculations.

DSHS acknowledged last week that it was reporting an unknown quantity of antibody tests as part of the “total tests” figure. Despite that, Gov. Greg Abbott incorrectly claimed Monday that the state was not “commingling” the numbers while promising the state would soon break out the antibody test count.

During a TV interview Thursday evening, Abbott attributed the lag in disclosing antibody tests as their own category to “about a 10-day period or so during which some antibody tests were coming — it could have been a bit longer than that — [when] there was the inability for the counties to separate that out as it was received by” DSHS. The new data provided by the state Thursday gives a daily breakdown of antibody and viral tests going back to May 13.

Abbott emphasized the relative smallness of the changes in the positivity rates as he argued in the TV interview that Texas is still seeing an overall downward trajectory in its positivity rate.

“The trends are exactly the same with or without the antibody tests,” Abbott said.

Still, the preciseness of the positivity rate is important, especially when it comes to understanding Abbott’s decisions to reopen the economy. As the raw number of cases has continued to climb each day, Abbott has said he is far more concerned with the positivity rate — which takes into account increases in testing — as well as hospitalizations.

Texas is not the only state that has come under scrutiny recently for mixing together the two types of tests in its data. Pennsylvania, Georgia and Vermont have also been conflating the tests, according to The Atlantic.

Viral tests, usually taken from nasal swabs, can detect an active coronavirus infection. If a person’s biological sample is found to have traces of the virus’s genetic material, public health workers can order them to self-isolate and track down any of their contacts who may have been exposed.

Antibody tests “are like looking in the rearview mirror,” Yasmin said, because they may show if a person has recovered from a coronavirus infection. That can be useful for public health surveillance, but it does not offer much insight about where the virus is currently spreading. Another issue is that many antibody tests have been shown to have high rates of inaccuracy, she said.

“As an epidemiologist, this level of messiness in the data makes your job so much more difficult, and it misleads the public about what’s really happening,” Yasmin said. “We’ve been talking about the capacity for testing increasing over the last few weeks, but now we might have to tell the public that might not be true.”

“This is crucial as we need increased capacity for viral testing before reopening to identify active infections even in the pre-symptomatic or asymptomatic stages,” the analysts wrote.

The mixing of the two testing numbers first came to light last week, days before Abbott announced the latest business reopenings. Democrats said the revelation continued to show that Abbott is moving too carelessly in allowing businesses to reopen.

“We all want life to get back to normal,” Texas Democratic Party spokesman Abhi Rahman said in a statement Tuesday. “However, Texans don’t feel safe, and manipulating the data isn’t going to help Texans feel comfortable going outside.”