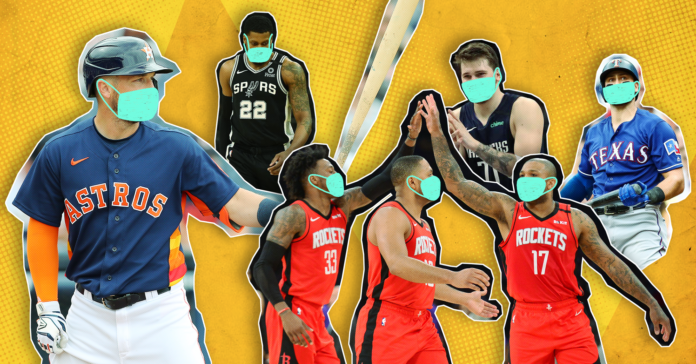 As the world continues responding to the coronavirus pandemic, and as people avoid large gatherings, Texas sports teams are not playing. It has already cost them hundreds of millions of dollars.

Normally by this point in a year, the ballparks in Houston and Arlington would be packed as hopeful fans watch the beginning of the 2020 season. But this year, spring training had to be canceled and the rest of the season’s future has become a nebulous maybe. The teams are already feeling the pinch.

The Houston Astros are not just a championship team, they are also a massive money-making endeavor. According to the annual Forbes list of franchise value, the Astros are the sixth most lucrative team in Major League Baseball.

Their losses are slated to be big as well. As of right now, they could lose $180 million in gate receipts because of the pandemic, approximately 40 percent of their income. Fortunately, they will be saving money on their $200 million player payroll. Players get a prorated salary in the event of a shortened or canceled season, and the players have agreed not to sue if the 2020 season doesn’t happen at all.

Also in the Astros’ favor right now; almost no one seems to be concerned with the sign-stealing scandal anymore.

The Rangers are in a similar situation, but with different wrinkles.

The team’s $1.2 billion new ballpark, Globe Life Field, is more or less complete, but some construction is still underway. Unfortunately, at least one worker at the field has tested positive for the coronavirus, and Manhattan Construction Company has instituted reduced hours and enhanced safety precautions in an attempt to protect its workforce. The Rangers, like the rest of MLB, have also pledged $1 million to help cover the payroll of all the ballpark employees. It may still be months before they, or anyone, is allowed to return to normal activities.

It is possible, but not likely, that baseball could have a modified season, but this year’s NBA season appears over. There has been some talk of resuming NBA games in the summer, but it’s hard to venture a guess that will really happen in what Dallas Mavericks owner Mark Cuban has called “the new abnormal.” The playoffs are supposed to be underway right now, and both the Mavericks and the Houston Rockets were poised to compete. Like so many other things, they remain in a holding pattern.

The players have kept busy doing philanthropic work. Rockets guard James Harden has been teaming up with Kroger stores to provide 600 meals a week to vulnerable communities in Alief and Houston. Point guard Russell Westbrook gave hundreds of laptops to school children to use for remote learning, and forward P.J. Tucker new clothing line will benefit the Houston Food Bank.

Their philanthropy comes as the NBA begins drastically cutting pay to the players. Beginning May 15, players will lose 25 percent of their paychecks. San Antonio Spurs players Dejounte Murray and Trey Lyles are among the few who will keep 90 percent of their pay thanks to a deal with Klutch Sports.

The NBA has not yet announced full cancellation of the season. With some cities considering reopening in May and a large chunk of conservative media advocating specifically for returns to sports arenas, it’s possible that the playoffs may still happen sooner rather than never. That said, the danger should not be ignored. Places that have defied orders have seen catastrophic results, such as an Indiana high school basketball showcase that led to five deaths. Cities have even started removing basketball rims from public parks to prevent games.

The XFL ended its ignoble second try this year for many reasons, but the coronavirus was definitely the nail in the coffin.

What about the NFL?

Right now, the league benefits from timing since the 2020 season is not slated to officially begin until Sept. 10. Teams are proceeding through the draft process virtually. As of right now, the NFL plans to proceed as if the pandemic never happened. More disturbingly, leaders don’t appear to be making any contingency plans.

Some hope that the pandemic will have abated by the time of regular season play and things will proceed smoothly for the gridiron warriors. However, Dr. Anthony Fauci, director of the National Institute of Allergy and Infectious Diseases, has predicted that even if the COVID-19 crisis slows in the summer, a fall/winter resurgence is almost inevitable, though he hopes that the preparations made during this phase will protect us better in the next one.

Hopefully, the NFL will keep that in mind as we move toward the first games.