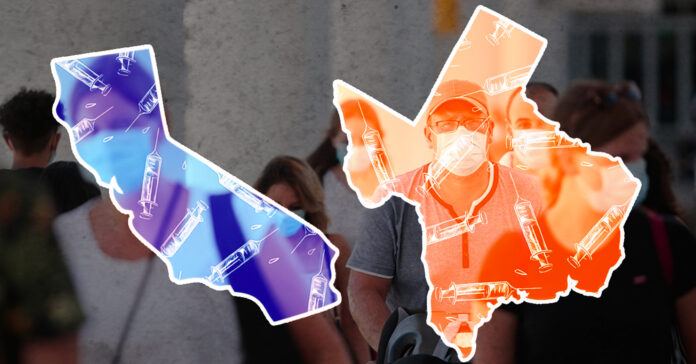 “Don’t California my Texas” is a popular (and ridiculous) battle cry from conservatives, but when it comes to fighting COVID maybe we should start looking to the Golden State for guidance. With the Delta Variant increasing both cases and deaths again, something better has to be done.

First, let’s look at the numbers. At the start of July, California had 1,452 new cases a day, which has risen to 6,209. Texas had 1,310, now up to 4,875. While it might seem like Texas is doing better than California by that measure, you have to remember that California has a population 36 percent larger than we do. Adjusted for population density, Texas is well ahead of California in terms of new cases.

Since the beginning of the pandemic, California has consistently taken a firmer hand in dealing with COVID. For instance, a mask mandate remained in place statewide until last month, and with new cases on the rise, it’s likely to be put back in place, especially in Los Angeles County. By contrast, Governor Greg Abbott lifted his half-hearted mask mandate in March and has since gone on to outright ban municipalities and schools from institutions one of their own.

“It would be inappropriate to require people who already have immunity to wear a mask,” Abbott said in an interview with KPRC. “But also, what we know is, everyone watching the show and in the state of Texas know exactly what the standards are and if they want to adopt them in order to help protect themselves.”

The Centers for Disease Control still recommend mask-wearing in most indoor settings and transportation. Only the unvaccinated should consider going maskless, and even then, they should still exercise caution in crowded indoor spaces.

The reason is likely political in nature. California Governor Gavin Newsome is a fervent vaccine supporter to the point that vaccinated persons were all entered into a lottery that has already paid out $16.5 million to 40 Californians. Incentive programs like this are why California has one of the best vaccination rates in the country.

Abbott has been openly hostile to incentivizing vaccines. He’s issued an executive order banning businesses from requiring users and customers to be vaccinated. Supply is far outpacing demand in the Lone Star State, with only tepid encouragement from state Republican leaders.

That encouragement is desperately needed. A survey from the American Enterprise Institute’s Survey Center on American Life shows that vaccination is a deeply political issue in America, with less than half of Republicans saying that most or all of their friends were vaccinated. That number is two-thirds for Democrats. Within conservative circles, encouragement from peers and leaders to get vaccinated is nearly non-existent (23 percent), and a third said they had been actively discouraged by friends and family from getting vaccinated.

It’s clear that there is a red-blue dichotomy when it comes to fighting COVID, with states like California embracing the things needed to protect lives and states like Texas failing to take necessary steps. The apathy from Texas leadership when it comes to masks and vaccination is why Texas is badly trailing California in combatting the pandemic.