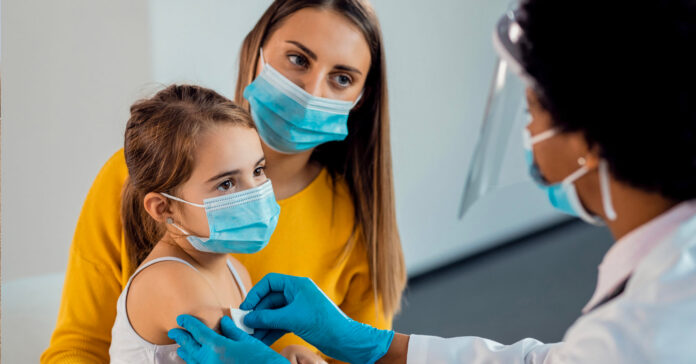 A Child-sized version of Pfizer-BioNTech’s COVID-19 vaccine cleared its first regulatory hurdle Tuesday for use in young children, after a Food and Drug Administration advisory committee voted to recommend that the agency authorize it for emergency use for those ages 5 to 11.

According to The Texas Tribune, the panel’s 17-0 vote, with one abstention, opens the door for formal approval by the FDA, which is expected to make a final ruling in the coming days. Rules for administering the vaccine to children from the U.S Centers for Disease Control and Prevention could follow as early as next week. Once the CDC’s guidance is released, shots could be going into the arms of younger kids in Texas by the first weekend in November, state health officials say.

Even though committee members were having some challenges deciding, they agreed on the fact that voting down the vaccine would remove the choice for parents who are afraid to send their healthy children to school.

“To me, the question is pretty clear,” said Dr. Amanda Cohn, a panel member, and health officer at the CDC. “We don’t want children to die of COVID, even if there are far fewer children than adults, and we don’t want them in the ICU.”

There are about 2.9 million Texas children who are in this age group — which is more than 10% of the national population of children who are ages 5 to 11. Their eligibility for vaccination, combined with strong vaccine acceptance among their parents, will go a long way in increasing Texas’ level of herd immunity and reducing the risk of children catching the virus and passing it along to compromised family members or friends, experts say.

The child-sized version of the Pfizer vaccine is one-third of the amount given to people ages 12 and up, yet it still offers the same level of antibody response that is found in 18 to 24-year-olds. Pfizer officials stated in briefing documents that the vaccine is 91% effective in preventing symptomatic transmission in kids, their test sample of about 2,200 children showed no new side effects, just the typical ones of those experienced by children after common childhood vaccines.

Texas has been allocated 1.3 million initial doses of the vaccine by the federal government and will start arriving this week after the expected FDA authorization.

There is no indication that Republican lawmakers and state leaders, who have adamantly opposed all COVID-19 vaccine mandates, will require a COVID-19 vaccination to attend school in the state.