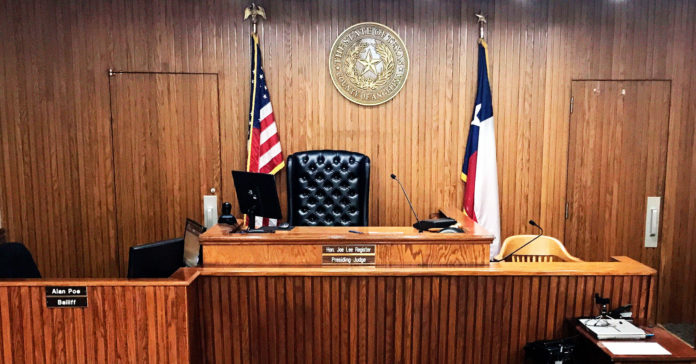 The COVID-19 pandemic has prompted courts at all levels in Texas to create actionable safety policies, including suspending jury trials.

Technically, there isn’t a ban on jury trials as three have been conducted since March and several are scheduled for July, said David Slayton, administrative director at the Texas Office of Court Administration.

But mostly, jury trials have been scarce during the past four months. The Supreme Court of Texas has prohibited jury proceedings through Sept. 1, except for ones held under specific conditions.

Since June 1, in-person hearings have been allowed if a remote proceeding is not possible, Slayton said.

The impact of the suspension hasn’t decimated the system, though. In 2019, there were approximately 168 jury trials per week statewide, and 99.9% of the cases in the court system were resolved through means other than a jury trial, Slayton said.

“So, of course, part of the focus for us throughout the pandemic is keeping all the other functions of the court system operating as much as close to full capacity as possible,” he said in an interview with Reform Austin. “Just because of the fact that we know that the majority of those cases are resolved.”

However, using available technology has been considered and even adopted as an alternative to in-person jury trials. Collin County used Zoom video conferencing in a summary jury trial in May.

“We’ve been able to use technology to keep most types of proceedings moving forward,” Slayton said.

He indicated that Texas had held more than 200,000 virtual hearings since the end of March, and that feedback from judges and lawyers from across the state has been positive.

But not everyone is convinced of the efficacy of the virtual trial solution. Our rights pertaining to a constitutional system of confrontational adjudication of disputes are threatened by the virtual process, said Jim Perdue Jr., president-elect of the Texas Trial Lawyers Association.

“There are proposals that one of those solutions would move everything online and in a virtual conversation that somehow occurs like a trial through Zoom,” he told Reform Austin.

Perdue doesn’t believe it’s a resolution but a path to create an entirely new system.

“The experimentation with moving everything online and creating a false trial that is conducted in nothing but a virtual space is not so much a solution but rather a proposal of a completely alternative system,” he said. “And that is something that needs to be looked at I think incredibly carefully and with very harsh eyes.”

“Videoconferencing seems to work fine for hearings in both civil and criminal cases, but I do not think remote trials will become commonplace in the near future,” she wrote in an email. “There will likely be some experimentation with civil trials.”

Jury trials have resumed in all of the divisions of the U.S. District Northern District of Texas except Dallas, she said.

Lyon doesn’t see criminal jury trials being conducted remotely due to constitutional protections and because of the issue of jurors or witnesses not having access to adequate or appropriate technology.

The internet connectivity matter was also mentioned by Perdue, who said that it presented challenges to people who don’t have the necessary internet accessibility to participate in a virtual trial.

The Texas court system decided on Zoom conferencing because it permits people to participate remotely via cellphone, laptop, desktop and even landline, Slayton said.

“That was very important from the very beginning trying to find out what type of tool to use because we knew some people have limited access to technology,” he said.

Many counties have set up Zoom kiosks at their courthouses offering another way for people to participate, Slayton said. He cited the successes Williamson and Travis Counties are having with this method.

Perdue is holding firmly onto his belief that the virtual jury trial is not the answer in a pandemic-stricken judicial system.

“It’s not a problem without solutions, but it is not a crisis that should be used to fundamentally change our concepts and our processes of justice,” he said.

Though Slayton admits that video conferencing isn’t perfect in all situations, he emphatically believes it has a future in the court system.

“I think virtual proceedings are here to stay,” he said.