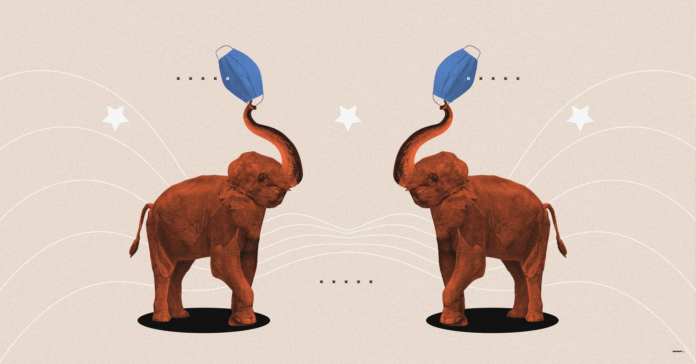 Houston and Harris County are currently experiencing the highest number of COVID-19 cases in the state, but that isn’t deterring the Republican Party of Texas from holding its state convention at Houston’s George R. Brown Convention Center in two weeks.

It was reported last week that the party does not believe Harris County’s mask order applies to them, a fact later confirmed by Harris County Lina Hidalgo’s office.

Reform Austin reached out to the party’s media contact for additional clarification about the party’s plans regarding masks as well as answers to other questions about possible health and safety precautions for the event. So far, there has been no response.

In the meantime, union leaders representing the employees of the Hilton Americas Hotel adjacent to the convention center are talking. Unite Here Local 23 Senior Political Organizer Bo Delp told the Houston Chronicle that many of the hotel’s employees are set to lose their health insurance at the end of June.

“Houston First has made a decision that during a global pandemic, it is going to continue to host events,” Delp said. “The minute they made that decision, from our perspective, they had a moral and public health obligation to make sure that the workers who are coming in as a result of their decision to host events, that they are healthy and safe.”

The chairman of the Houston First board that manages the GRB and the Hilton disputes the claim the employees will be without insurance, saying those working the event will be covered.

Convention center management also claims they do not have the authority to enforce a mask requirement because it wasn’t included in the contract, which was finalized before COVID-19.

“HFC does not have the authority to require masks to be worn by attendees at the Republican State Convention, unless included in the original license agreement,” Carolyn Campbell, a spokesperson for Houston First, wrote in a statement to Salon.com. “Since this agreement was issued prior to the pandemic, no such provision was included, therefore any enforcement of the new mask order would be the responsibility of the Republican State Convention.”

Gov. Greg Abbott has in place a restriction on outdoor gatherings of more than 100 people, but he has remained silent on extending the order to indoor events like his party’s state convention.

The Texas GOP convention is scheduled for July 16-18. More than 6,000 attendees are expected.

The Texas Democratic Party opted for a virtual convention in early June due to COVID-19.