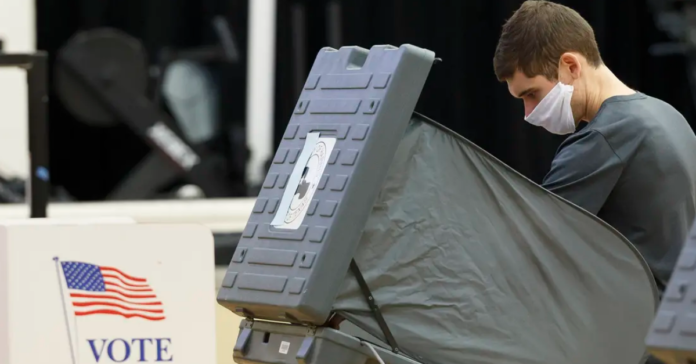 Seeking to vote in Tuesday’s primary runoff election, two Austin residents who recently tested positive for the new coronavirus asked a state district judge Tuesday afternoon to allow them to get around a state rule requiring a doctor’s signature for emergency mail-in ballots.

In a lawsuit filed in state district court in Travis County, Linda Elizabeth Harrison and her husband, Vernon Webb, argue that the state’s criteria for applying for an emergency ballot to fill out at home is unconstitutional and imposes an undue burden on the right to vote. Unlike applications received before the deadline to vote by mail, voters submitting applications for emergency ballots must submit certification from a doctor that the voter has developed an illness that would keep them from being able to vote in person.

The application cutoff for voters seeking to vote by mail in the runoff was July 2.

That’s the same day Harrison learned she had tested positive for the virus. Her husband was tested soon after and learned his results July 9. They are both under medical orders to self-quarantine and have been experiencing respiratory issues and fatigue — both symptoms of COVID-19, the disease caused by the coronavirus.

The couple did not learn about the requirements for obtaining an emergency mail-in ballot until the day before election day. They’ve since attempted to contact their doctor’s offices to obtain the certification they need but haven’t heard back, the lawsuit reads.

The lawsuit filed by the Texas Civil Rights Project against Travis County Clerk Dana DeBeauvoir seeks a temporary restraining order requiring DeBeauvoir to accept a late mail ballot application without requiring a physician’s signoff. Harrison’s and Webb’s ballots should then be accepted and counted as properly completed mail ballots as long as they are returned by 7 p.m. Tuesday.

“Defendant’s practice effectively treats Plaintiffs and voters who were diagnosed with the same illness just a few days prior in a different manner, allowing one to self-attest to their illness while requiring the other to obtain a doctor’s certification, imposing additional burdens and costs,“ their lawyers wrote in their petition.

With strict eligibility criteria, voting by mail is not widely used in Texas. The option is generally reserved for voters who are 65 and older, those who cite a disability or an illness, and those who will be out of the county they’re registered in during the election period.

Voters who submit an application to vote by mail on the basis of a disability or an illness before the regular deadline are not required to say what the condition is, nor do they have to submit any proof. In filling out their application, they simply check a box on the form. And local officials processing applications are not allowed to question or investigate their reasoning.

The Texas secretary of state’s office has instructed local election officials that the emergency ballot application can be used for voters who contract the virus after the regular deadline for mail-in ballots.