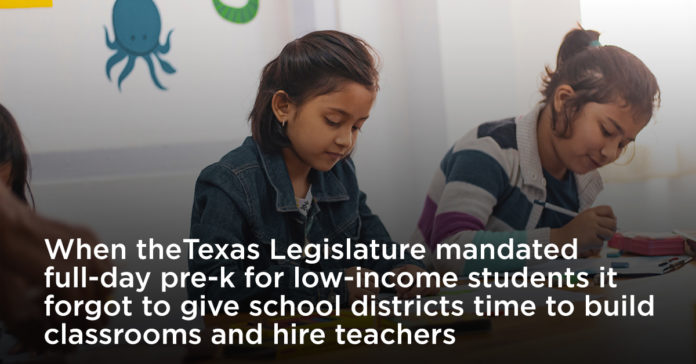 Under HB-3’s provisions, school districts across Texas are required to offer free full-day pre-K for eligible students. Eligibility is limited to students that turned 4 years old before Sept. 1 and are either economically disadvantaged, an English language learner, homeless, part of a military family or in the foster care system.

Despite the focus on early childhood development, state law didn’t account for school districts’ lack of infrastructure. School districts have had to hire new teachers, develop curricula and find the physical space for the new classes.

The lack of preparation has led to school districts across the state to delay the new offering. In North Texas some districts are saying that they won’t be able to begin offering full day pre-K until the start of the 2020-21 school year.

In Houston, Cy-Fair ISD will launch expanded pre-K in January. New Caney ISD sought a waiver for this school year while district staff examine the best way to implement the new program.

The lack of preparedness is also apparent in some of Texas’ smaller school districts, College Station ISD is also delaying the start of full-day pre-K until next year.

In order to spin up pre-K classes quickly some school districts are considering partnerships with Head Start, a federally funded program that provides early childhood development and nutrition assistance to low-income families.

Although Texas school districts have partnered with Head Start to offer pre-K education for years, the difference between what Head Start offers and what state law requires comes down to eligibility.

To qualify for Head Start’s pre-K classes a family of four must make less than $26,000 per year, whereas state law raises the income eligibility to less than $48,000 per year. At this point it’s unknown how districts that decide to partner with Head Start for pre-K will be able to adjust eligibility requirements.