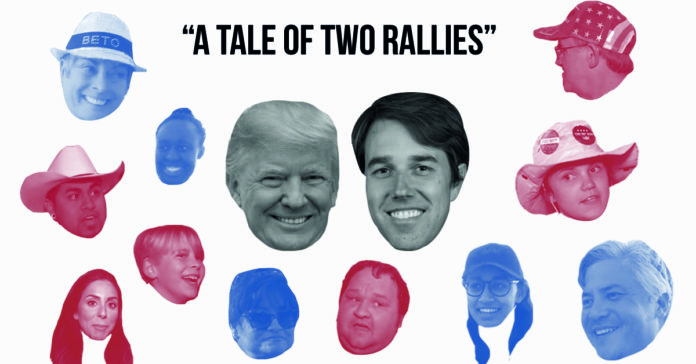 Both President Donald Trump and Beto O’Rourke, former Congressman from Texas, held dueling rallies in Dallas on  Thursday, Oct. 17. Reform Austin sent a team to find some of the basic beliefs of the attendees.

We didn’t go inside either event, opting instead to talk to Texas residents and ask the following questions:  Why are you here? What makes you hopeful? What makes you angry? How do you feel about gun control?

Although Trump’s crowd and Beto’s crowd were divided by some fairly predictable subjects, they were also united on many issues. Our first stop was the Beto Rally Against Fear.

The atmosphere at Beto’s rally felt more like a rock concert than an appearance from a candidate polling at 2 percent. The rally was held in the Theatre at  Grand Prairie, in Grand Prairie, Texas — a location that helped keep the event festive.

Music played in the background, volunteers chanted an enthusiastic supporter was dressed as the iconic baby Trump balloon and attendees sported shirts with slogans of love and welcome.

Beto signs were propped on the walkways and directed traffic to the parking lot. When we began talking to the attendees, we found that they came for a variety of reasons.

Not all of the attendees were there to help elect Beto president, although some of them did say Beto was their first choice. The lack of enthusiasm could be because the Democratic presidential field is still very crowded.

The rally may not have been 100 percent on target when it came to getting people excited about Beto’s candidacy, but increasing Beto’s voter turnout wasn’t the goal of the rally — according to the event’s organizers.

The rally was held to “unite [people] against the rhetoric of the current administration,” according to O’Rourke’s campaign. The event was designed to “bring people together to combat ideas of hatred, fear, and division.

“It’s no longer okay not to be racist, we must be anti-racist,” Beto said, standing in the center of the room amongst the crowd. He then named the murder of Atatiana Jefferson, healthcare, immigration, and the treatment of migrant children as his top priorities moving forward.

Some attendees came  for the message of unity and building “bridges not walls.” One man told us that, even though Beto wasn’t his first choice for president, he would “support him if he won the nomination.”

Many members of the crowd believed military-style weapons should be bought back from their owners, an idea that has garnered Beto a fair share of criticism Despite the pushback, many in the crowd were confident this a gun buyback was imperative for public safety.

The Texans we spoke with were hopeful they wanted to believe that change was coming. One woman we talked to worked with non-profits who were assisting children caught in the political conflict at the border.

An avid Beto supporter from day one, she said he was speaking to the unique needs of Texas and was the only one who understood what would truly solve the issues we face.

The crowd was diverse, made up of families, college students, and individuals who wanted to stand in defiance of what was happening 14 miles down the road.

At the American Airlines Arena, the energy was completely different. The street outside of Trump’s rally was lined with merch booths selling t-shirts, signs, and flags — all supporting his messaging.

This was a campaign rally, and it felt like one, there was triumph and celebration in the air. People were excited to be there, parents had brought their children, couples reclined in lawn chairs, and groups of college students ambled around, waiting to hear Trump speak.

For some people, the rally was an all-day affair. They spent hours waiting for the event for fear of losing their chance to see Trump speak.

The communal joy of the event brought people together, with groups of strangers holding hands and cheering when the rally started.

We found that many Texans identified with Trump because they felt silenced.

They believed they didn’t have a political home before Trump. According to attendees, Trump changed that by appealing to the ignored groups, wealthy groups, and those who felt that no one understood them, and gave them a voice.

His talking points on trade deals, corruption, and the economy were met with applause, and his hits at national Democratic leadership were met with standing ovations.

Chants of ”Four more years!” and “USA!” broke out, and it was obvious that attendees were happy to be there.

It was clear that the crowd was ride or die for Trump, and when it came to impeachment everyone agreed the accusations were false. They believed that the Ukranian allegations were based on fabricated information planted by Trump’s opponents to distract supporters from the president’s successes.

Every person we spoke with was a Texas resident and supports Trump in 2020.

When we asked people why they were there, they said they truly believed in what the President was doing, and shook off any questions or critiques of the President.

When asked about Beto’s gun buyback, the program was a non-starter with the Trump crowd. Some of them didn’t believe a mandatory gun buyback was logistically feasible — particularly in Texas.

Reactions ranged from outrage to scoffing, with Trump supporters proclaiming there was no way for anyone to take away their weapons or infringe upon their Second Amendment rights.

Both Beto and Trump’s crowds were united by a desire for safety, both were divided by how they wanted to achieve that safety.

Both crowds said the possibility of mass violence makes them feel unsafe. How we get to the point where people feel safe represents the big difference between those at the Beto event and those at the Trump rally.

People on both sides care about their families. Texans want to provide for their families, maintain stability, and work in the field they desire. Some think that Trump is doing that for them, while others believe he’s benefiting from former President Obama’s legacy.

People are paying attention. Texans are registering to vote, and, even those too young to vote have opinions on what is happening.

There is a new fire behind the idea that Texas could be a deciding factor in the next election, a prediction that will be borne out (or not) next November.