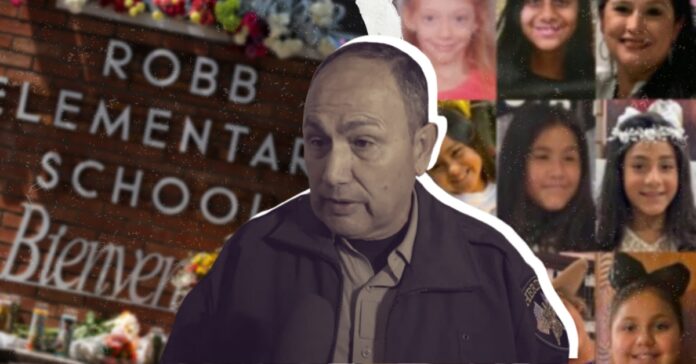 Despite the benefit of more than 30 years of law enforcement experience, Uvalde County Sheriff Ruben Nolasco chose to wait — rather than take command — of the scene at Robb Elementary School, even though he knew that a gunman was firing inside the school.

The sheriff failed to effectively communicate that active shooter protocol should be followed to neutralize the threat – either while en route or on the scene to the many teams available that day.

CNN’s continued investigation into the tragedy has revealed that even though Nolasco knew many of the officials in the multiple agencies he could have contacted after they had arrived at the school, he chose not to do so.

He inexplicably stayed at another crime scene instead of immediately heading to the school on the day of the tragedy. At that scene — the shooter’s grandmother was found shot in the head — and she identified her grandson as her attacker.

He claims that he was alerted by a citizen as he drove past the house, informing him that the woman had been shot. He stayed with the injured woman as medics arrived, loading her onto a stretcher and taking her to a hospital.

Bodycam footage analysis shows that despite Nolasco having that vital information about the Robb Elementary School shooter, he did not share it with his law enforcement counterparts at the scene.

Instead, he texted other officials that the shooter was “barricaded at the school,” rather than being engaged in a massacre.

The sheriff was one of the 376 officers on the scene who could have breached the school immediately to help children and teachers trapped inside with the gunman.

But, unlike a vast majority of the officers, he had the rank — and the duty to take charge — as he knew of the 911 calls from children about victims in a classroom inside.

Once he arrived, Nolasco told officers on the scene that more DPS troopers were on their way, and directed them to maintain their positions until he could determine who was in charge.

His failure to lead left crying and wounded children and teachers to defend themselves, with no law enforcement assistance for over an hour. The result was that 19 children and two teachers lost their lives that day — while some of them could have been saved if Nolasco had acted in the capacity he was elected to do.

However, the video showed the sheriff arrived at Robb Elementary by 11:49 a.m. — 16 minutes after the gunman entered the school.

But instead of being immediately condemned for his inaction, Nolasco, a Republican, was comforted by Gov. Greg Abbott and Sen. Ted Cruz, his political allies.

He initially refused to testify in the Texas House of Representatives investigation into the mass shooting and faced a “contempt of Legislature” misdemeanor charge, punishable by 30 days to a year in prison before agreeing to comply with the request.

But as an elected leader, Nolasco has not been subject to the same scrutiny as the school police chief, who has been fired. Nor that of the acting city police chief, who was forced to retire before he could be fired. And members of the Texas Rangers and the Texas Department of Public Safety have all faced official scrutiny, leading to suspensions and at least one termination.

After CNN detailed Nolasco’s actions in their ongoing investigation into the leadership fiasco that ensued at Robb, Nolasco rejected requests for interviews for months. The sheriff refused to answer questions about the investigation at Robb Elementary.

When reporters finally caught him on camera in November, he refused to respond to most questions, but when asked if he thought his response was adequate, he said “Yeah, I do.”

KSAT 12 reporter Alicia Barrera asked him if he had anything to say to the community he was elected to serve. “(I’m) not talking about the investigation. I’m talking about your message to your community that you serve. Are there literally no words, no comments?” Barrera asked.

Families of the victims, however, still want to know more about his role on that fateful day.
“We feel he should have done more to save children,” said Berlinda Arreola, step-grandmother of Amerie Jo Garza who was killed in the rampage. “We feel like he’s hiding something. There is a reason he hasn’t spoken to anyone,” she told reporters in the wake of the ongoing investigation.