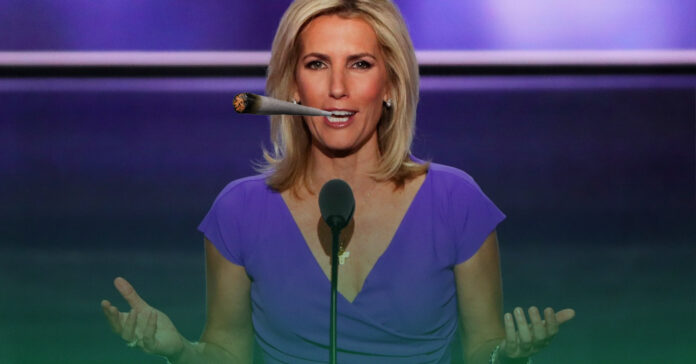 After the tragedy of the school mass shooting at Uvalde, conservatives have been desperately pulling at strings trying to shift the conversation from much-needed gun regulation to petty excuses.

From blaming mental health (that they don’t want to fund support for, either), unarmed teachers, too many doors in schools, lack of prayers, to what Fox News Host Laura Ingraham believes is to blame for the violence crisis in America: “potheads”.

The Fox News Host stated on national television that it isn’t the deadly rifles used in war that kill people, rather the recreational and medicinal drug used in high school parties and hospital rooms to ease cancer patients’ pain is the one to blame.

The two assault rifles that Salvador Ramos bought legally on his 18th birthday are not what the government should be looking into according to Ingraham. The nation’s true enemy is the little green plant that is slowly becoming legal in many countries.

During a segment with Russell Kamer, M.D., the medical director of Partners in Safety, an organization that helps companies perform drug tests on employees, she held on to the alleged fact that the shooter was a user of said drug, and that the fact was later edited out by The New York Times.

According to her and Kamer, the focus should be on the cannabis-induced psychosis that happens when someone consumes marijuana. They continue to make apparent links between violent teenagers and smoking pot, even alluding to Colorado, one of the first states to legalize the drug, and the place where the infamous Columbine shooting occurred.

He stated that his “colleagues in Colorado, where they’re sounding the alarm because that was one of the first states to legalize—it’s practically a daily occurrence that kids come into the emergency rooms in florid, cannabis-induced psychosis.”

She then criticized democrat candidate Beto O’Rourke for pledging to place restrictions on gun use and acquisition (he has never talked about a total ban, but rather implementing Red Flad Laws, permits, and background checks for purchasing guns) and being an advocate for the legalization of marijuana in Texas.

“People like Beto…they are fine with doing a run on the guns, and I guess you could argue that if that’s what you want to do—try to get rid of the Second Amendment—but yet [they are] completely oblivious to what the legalization of marijuana has done and is doing to an entire generation of Americans with violent consequences,” she said, nitpicking and twisting information to fit her absurd arguments.

Of course, she did not mention the facts that show that countries with legalized marijuana for years now have had no issues with increments of violence. Many countries in Europe, like the Netherlands, have opted for its legalization along with proper health campaigns to inform people of the risks of consumption and proper care. Demonizing marijuana doesn’t stop people from consuming it, it just makes it harder for them to do so responsibly.

This is just the latest attempt of the conservatives to attempt to blame anything, whether it is mad morals, weed, or school doors, to remove responsibility for their constant endorsement of loose gun regulations that lead to deadly consequences that echo through Americans’ collective memory for years.

There is no denying that mass school shootings are very complex and cannot be pinpointed down to one single reason why they happen. Lack of mental health support (that, again, conservatives have no plan on bettering), family situations, and many more play a part in these atrocious acts. But choosing to ignore that the easy access of children to war-engineered guns is also a central part of the problem is dangerously irresponsible.

Columbine, Sandy Hooks, Uvalde, and many more names make up a list that becomes infinite. If those in power refuse to leave their political party feuds aside and assume responsibility, more names will continue to be added to the list.