Home Public Safety Mistakes Were Made In Uvalde, How Do We Move Past Them?
Facebook
Twitter
Email 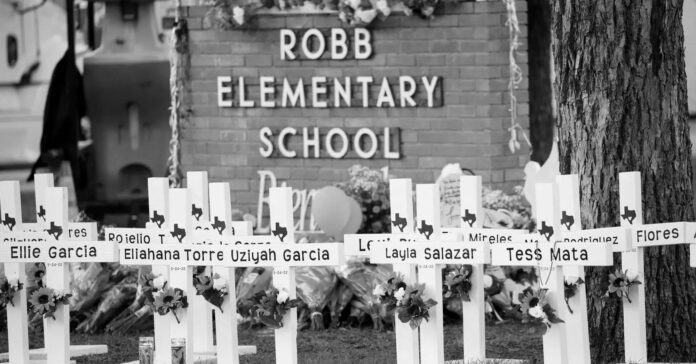 On May 24th, a gunman by the name of Salvador Ramos entered Robb Elementary School in Uvalde and killed 19 students as well as two teachers over the course of one hour. Out of the many mass shootings that have occurred in the United States, the backlash the Uvalde Police Department has received has been almost unprecedented. The criticisms stem largely from the amount of time, one hour and 15 minutes, it took for police officers to re-enter the building after their first confrontation with the shooter as well as the police department’s overall mishandling of the situation.

After a series of mass shootings in Texas, the Uvalde school district doubled their security budget in 2017, investing heavily into social media monitoring, campus police, and teacher training to prevent future shootings. Additionally, the district received $69,000 dollars from a $100 million dollar state grant programme for physical security enhancements including metal detectors, barriers, security systems, and an active-shooter alarm. The fact that so many mistakes occurred in the May 24th shooting may indicate that the financial support is not being used effectively.

Despite the funding into social media monitoring, Ramos was not flagged as a threat even after having conversations online about school shootings.

“Are you gonna shoot up the school or something?” an acquaintance once asked in an Instagram group chat, two months before the shooting.

It was also reported that Ramos had conversations with several young women, where he would send angry messages and photos of guns, and if the girls did not respond how he wanted, he would threaten to rape or kidnap them. These women rarely reported him because his threats seemed too vague, and according to one of the girls, that was just “how online is.”

Many reports, including a report by the Advanced Law Enforcement Rapid Response Training Center at Texas State University, indicated that the Uvalde Police Department made a series of mistakes before and during the shooting. Generally, it seems like the police department was always one step behind where they needed to be. Despite the funding that the Uvalde school district was given for security, there were no police officers on the school’s campus on the day of the shooting. According to cameras in the school, police officers did not appear in the hallway of the school until the shooter was already in the adjoined classrooms 111 and 112. 40 minutes before the killing of the shooter, specially trained agents from the Bortac SWAT team drove from the U.S.-Mexico border to assist officers in Uvalde, and they were baffled when local officers told them to wait before going inside and were confused why the Uvalde Police Department’s own SWAT team was not present.

The mistakes that were made on May 24th can be classified into two categories: operational and mechanical, with a vast majority of the mistakes being made on the operational side.

The shooter was actually in the presence of police officers prior to the shooting. According to Steven C. McCraw, Director and Colonel of the Texas Department of Public Safety, “[the] officer was not on scene, not on campus, but had heard the 911 call with a man with a gun, drove immediately to the area, sped to what he thought was the man with a gun, to the back of the school, to what turned out to be a teacher, but not the suspect.”

McCraw continued, “In doing so, he drove right by the suspect, who was hunkered down

behind the vehicle, where he began shooting at the school.”

Additionally, a different police officer spotted the gunman before he entered the school and aimed his rifle at the gunman, but instead of shooting, he waited for permission from a supervisor. After not hearing a response, the officer turned to get confirmation, and by the time he turned back, the gunman was already in the school. According to the Texas Penal Code, deadly force “is immediately necessary to prevent the commission of murder.” In this scenario, the police officer did not need permission to open fire; proper training measures should be implemented so officers know when they need or don’t need permission to open fire.

“When it comes to an active shooter, you don’t have to wait on tactical gear,” McCraw said, adding, “There were plenty of officers to do what needed to be done.”

Indeed, officers did initially approach the classrooms the gunman was in, but three of officers were shot, grazing two of them, which caused them to retreat to their respective ends of the hallway, where they stayed without firing a shot. This instance caused the officers to lose momentum and significantly contributed to the delay in the killing of the gunman.

There could have potentially been more than 21 casualties if the shooter had exited the classroom. ALERRT, Advanced Law Enforcement Rapid Response Training Center, says the gold standard for active shooter training is that a single team should have no more than four officers, and they should all be centralized in one area because splitting up can lead to a crossfire shootout. The Uvalde officers were stationed on both ends of the hallway. If the shooter had emerged from the classroom, officers would have likely ended up shooting each other.

Overall, there was not a cohesive plan to take down the shooter, and there were misunderstandings about who was in charge. Pete Arredondo, the Uvalde school district police chief, should have been the person to create a plan to rescue the children, but he reportedly believed he wasn’t in charge.

A report indicated that while a teacher closed an exterior door when the lockdown was announced, she did not check to see whether the door was locked. She reportedly did not have “the proper key or tool to engage the locking mechanism on the door.”

The report continues, “Because it was not locked, the attacker was able to immediately

At one point, a combination of federal agents, police officers, and county deputies were preparing to enter the classroom the shooter was in, but the door was locked. The group was only able to enter the room after a staff member brought them a key. It raises questions about whether the school had common safety features like a master box of keys that are accessible to law enforcement.

Following the Uvalde shooting, Texas leaders, including Governor Greg Abbott, announced that they will spend more than $100 million dollars on school safety and mental health through August 2023. More than half of the money will go towards bullet-proof shields for school police officers. The second largest expenditure, $17.1 million dollars, is allocated to silent panic alarm technology which can be used to alert law enforcement in the event of an emergency. Mental health efforts include $5.8 million dollars to expand telemedicine for children and $4.9 million dollars to increase the use of a treatment program for at-risk youth.

There has been opposition from gun control advocates, who believe the funding is inefficient and side steps the real solution in common-sense gun policies.

“Once again, Governor Abbott’s response falls short and is out of touch with the realities of Texas’ gun violence crisis,” Liz Hanks, a volunteer with the Texas chapter of Moms Demand Action, said in a statement. “We need evidence-based solutions to prevent school gun violence, not ineffective measures that militarize our schools. “