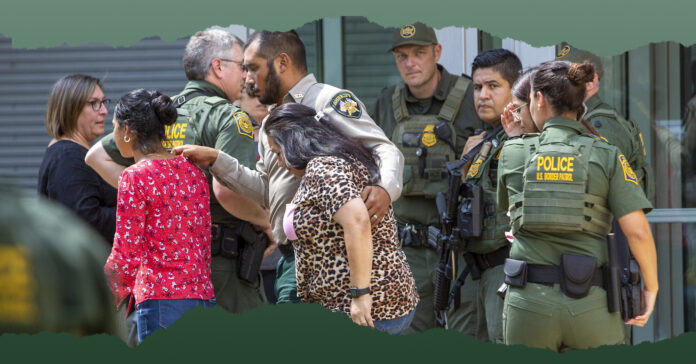 Updated June 14 to include reporting from the Austin American Statesman, who obtained handwritten notes Gov. Abbott took at a briefing following the shooting, and the San Antonio Express-News that over a dozen DPS officers were present in the hallway as the gunman was locked inside a classroom for over an hour. DPS on Tuesday denied the account, clarifying more than a dozen officers were at the school and had at times “entered and exited” the hallway as officers waited during the standoff.

Uvalde’s massacre was plagued with one incompetent decision after another, from faulty radios and missing keys to police officers who hung out in the hallway for more than 40 minutes while kids and teachers pleaded for help. You cannot help but question how many lives could have been spared if we had actual qualified leaders in charge.

According to The New York Times, more than a dozen of the 33 children and three teachers originally in the two classrooms remained alive during the 1 hour and 17 minutes it took for officers to take down the shooter.

Even though some law enforcement at the scene were fully aware that some of the kids and staff were in need of urgent medical attention, Chief Arredondo decided to wait for protective equipment to lower the risk to law enforcement officers – after two of them were grazed by bullets when peering into the classroom.

“People are going to ask why we’re taking so long,” a man who investigators believe to be Chief Arredondo could be heard saying, according to a transcript of officers’ body camera footage. “We’re trying to preserve the rest of the life.”

Most of the details remain murky. We are unaware if Chief Arredondo or other officials inside the school learned of the 911 calls from a child inside the classroom who said that some had been shot but were still alive. Or whether they were even sure if the door was locked.

The shifting narratives from the state in the days following the shooting have confused and alarmed the public. The Austin American Statesman reported the “copious notes” Gov. Abbott took after he was briefed did not reflect his accounting of the heroism of police immediately engaging the gunman at a press conference later that day.

Texas Department of Public Safety has refused to share any new details referring reporters to the Uvalde District Attorney, who told the Uvalde Leader-News it will take six months for the investigation to be completed and publicized.

The San Antonio Express-News report over a dozen DPS officers were present in the hallway along with Uvalde City and CISD police, and border patrol agents during the hour the gunman was locked inside a classroom with students and teachers. State Sen. Roland Gutierrez recounted this detail from a conversation with DPS Director Steve McCraw on June 3, which DPS is disputing. The state law enforcement agency says over a dozen DPS officers were at the school but did not amass in the hallway where law enforcement waited to breach the classroom with the gunman inside. They did admit DPS troopers had at times “entered and exited” that hallway.

What we know for sure is that several victims died following the classroom being breached by law enforcement, including one of the teachers, Ms. Mireles, who died in an ambulance, and three children who “bled out” and died nearby hospitals.

Ms. Mireles’s husband, Ruben Ruiz, who worked for Chief Arredondo as one of six uniformed members of the Uvalde school district’s Police Department, rushed to the school to inform the responders on scene that his wife was still alive in one of the classrooms.

“There’s a teacher shot in there,” an officer could be heard telling the sergeant, according to the transcript, just before 12:30 p.m. – around 20 minutes before they stormed the classroom.

“I know,” the sergeant replied.

Details of what took place inside the school have been slow to surface, and the narrative has completely shifted from a story of swift response by the local police to one of hesitation.

The gunfire at the school started at 11:22 a.m, and until an hour later at 12:21 p.m Chief Arredondo decided it was time to breach the classroom. However, there was one small problem: Where is the key?

After shuffling through what seemed like an abnormal amount of keys, specially trained Border Patrol agents and a sheriff’s deputy finally went in after the gunman and killed him at 12:50 p.m – but hold on, get this: not thanks to Chief Arredondo’s orders.

The team that entered was not fully aware that the Chief had given the go-ahead. They believed they were taking the initiative to go into the classrooms, according to a person briefed on the team’s response by a federal agent involved in the tactical effort.

The lack of clear orders was also a direct result of the officers arriving at the scene with radios that did not function well. To make matters worse Chief Arredondo actually entered the scene without a radio at all and used a cellphone for some communications.

Later on, in an interview with The Texas Tribune, Chief Arredondo, said that without the radios – that he left behind because they would have been an encumbrance- he was unaware of the 911 calls coming from the classroom and that none of the other officers in the hall has relayed that information.

He also admitted that he never considered himself the commander at the scene and had assumed someone else had taken control of the response.

“I didn’t issue any orders,” Chief Arredondo, whose department had jurisdiction over Uvalde schools, said.

Minutes later, the team went into the room, shot the gunman down and started to  retrieve the children’s limp, little bodies away from the freshly stained linoleum of their once happy classroom.

Democrats and several Republicans are pleading for a special session to hammer down gun reform issues. However, Texas Gov. Greg Abbott has decided no special session is needed, instead, a special legislative committee should be an effective response.

He has been putting out press releases almost daily to direct agencies into doing different actions, including a few of the same ones he did following the Santa Fe, El Paso, and Odessa shootings. But has taken not used his executive powers to pass new laws.

More recently, he directed the Texas Education Agency (TEA) to create a new chief of school safety and security position, to ensure increased communication and collaboration among state agencies to provide a safe environment for Texas students and school faculty.

Neither action alone will make a substantive difference for students heading into the next school year.