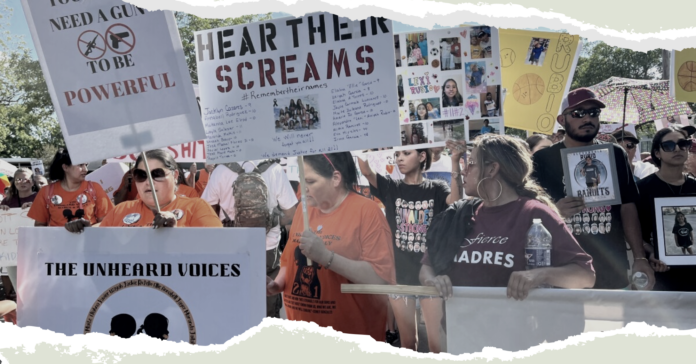 On Sunday evening, as temperatures topped out at a withering 104 degrees, some 500 demonstrators gathered in southwest Uvalde at Robb Elementary School—the site, 47 days prior, of the deadliest school shooting in Texas history, which left 19 elementary-age children and two teachers dead. Out front sprawled a memorial to the lives stolen: a collage of weathered stuffed animals, crosses, letters, and flowers.

Vicente Salazar, who lost his 4th-grade granddaughter Layla Salazar—who loved music and the Dallas Cowboys—addressed a throng of reporters. “We have to have change in our Texas government … change the policies, change our representatives and everything,” he said, demanding that the age of purchase for AR-15-style rifles, like that used by the 18-year-old Uvalde killer, be raised from 18 to 21.

Salazar then turned to the law enforcement response to the shooting. “It’s a joke; I could’ve did a better job myself if I’d been able to get through their lines,” he said, explaining that he was among the many incensed Uvaldeans who were forbidden to cross a police perimeter line while cops took 77 minutes to kill the shooter. The delayed response has enraged the local community and drawn condemnation from law enforcement experts, while state and local officials have worsened the matter by spreading conflicting and false information and denying access to records. “If you’re taking a badge to protect the people, and protect the babies, why didn’t they do it? We still can’t get answers,” Salazar said.

At a quarter to six, the demonstrators assembled on Geraldine Street by the school, flanked in front and back by state troopers on motorcycles and bicycles. A crew of Brown Berets, from multiple Texas cities, organized the crowd and handed out waterbottles. Sweat poured as the march began. Families of the slain wore matching custom-made t-shirts to commemorate the unthinkable. The protesters carried signs reading: “Bullets are not school supplies,” “You don’t need a gun to be powerful,” and “Hear their screams.” They chanted: “Not one more child” and “Qué queremos? Justicia! Cuándo? Ahora!” (What do we want? Justice! When do we want it? Now!) as the sun beat down.

“Thoughts and prayers are appreciated, but we need change; we need to stop this from happening to any other kids and any other schools in America,” said Micaela Alvarez, a child victims advocate who’d traveled from San Marcos to participate, as she walked. “I also don’t think there’s really any reason someone needs an assault rifle.”

After a mile, the assembly halted at Uvalde’s town square, where live oaks provided merciful shade. One by one, representatives from each of the 21 families took to the podium to speak, a procession of still-roiling rage and grief that lasted about two hours.

“What I want no one can give me: I want my daughter back, and if I can’t have her, then those who failed her will never know peace,” said Kimberly Rubio, mother of Alexandria Rubio, through tears. “We want answers, we seek justice, and we demand change—and we will never rest.”

Blame centered most frequently on Governor Greg Abbott for signing lax gun laws in Texas and on Pete Arredondo, chief of the Uvalde school district police, for failing to stop the shooter sooner. Some called for all cops who were present that day to resign. One father, Javier Cazares, said he was helping launch a new chapter of the League of United Latin American Citizens in Uvalde. A handful stressed the importance of voting in November. State Representative Tracy King and gubernatorial candidate Beto O’Rourke attended.

“It’s unbelievable that in this country guns have more protections than children and women,” said Destiny Esquivel, 16-year-old cousin of Maite Yuleana Rodriguez.

Speaking of the police response, the aunt of Xavier Lopez added, “There is no excuse they could ever say that would justify them being cowards,” while A.J. Martinez, one of the kids who survived the attack, shared, “Right now I don’t feel safe anywhere. … I don’t want nobody to have to go through what my family and friends, or the community, went through.”

Some family members focused on sharing heartrending details about the lost children, who loved softball and dancing, telling jokes and anime. One sister wept almost from her first word to her last. Not a few looked to the afterlife for solace.

Not long after a generous rain cloud finally blocked the sun, Alysandra Garcia took to the podium. Her mother, Irma, was one of the teachers killed in the attack, and her father, Joe, suffered a fatal heart attack two days later.

“My sweet mother, who would never hurt a soul, stared at her murderer in the eyes in her last moments. … She was the backbone to our family, and we will never be the same,” Garcia told the crowd. “So, my gracious and perfect parents, when we meet again in Heaven, we can finally have our first dance, since y’all won’t be there for my quinceañera.”