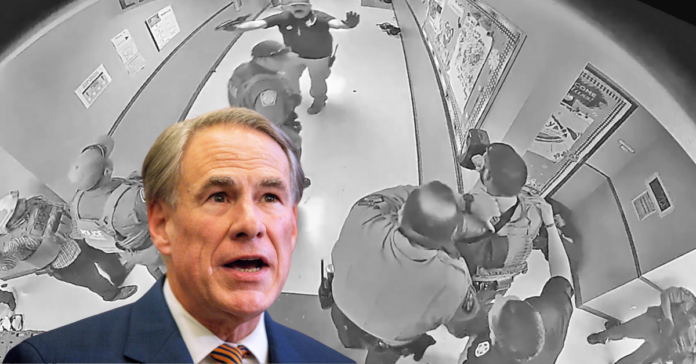 Uvalde and the State of Texas deserve better than a Governor whose initial statement when addressing the deadliest school shooting in Texas history was: “It could have been worse.” 19 children were killed during the shooting.

Uvalde’s massacre was plagued with one incompetent decision after another, from “missing keys” to police officers who hung out for more than 40-minutes in the hallway while children and teachers – who were only a few meters away – pleaded for help minutes before getting shot.

Almost two months have passed since this terrible event, and still, no clear answers have surfaced. State and local officials have worsened the matter by consistently spreading conflicting and false information, whilst denying access to their records.

The narrative keeps shifting, most facts about the police response have been misleading and the information that has more recently surfaced are leaks or lawyer-mediated, self-serving narratives.

The people of Uvalde deserve answers, and the officials responsible for the tragedy need to be held accountable. The continuing lack of transparency seems to be a defense mechanism for everyone involved.

So far, the designated scapegoat, Uvalde schools chief of police, Pete Arredondo, has been the only person to resign. Even though the chief clearly is at fault, the problem is much bigger than local enforcement. Much of the false leaks of information have come from a bigger source: the Texas Department of Public Safety – which falls directly under Abbot’s jurisdiction.

The downfall began on May 27, just three days after the massacre. Steve McCraw, Director of Texas DPS, announced to a grieving town that police had committed a grave “mistake.” The original narrative that law enforcement made a swift response, suddenly shattered.

The reality was that while students and teachers needed immediate medical attention police officers stayed behind waiting for shields and backup. According to a report by the Advanced Law Enforcement Rapid Response Training Center, the reason for the massive delay of re-entry is that the police officers believed the active shooter stage was over and that the situation would enter a barricaded standoff. Yet, there was no evidence to support these claims and even if there was, police officers are taught that they are behind innocent civilians in the hierarchical list of priorities.

In addition, when a combination of federal agents, police officers, and county deputies were preparing to enter the classroom the shooter was in, they couldn’t because of an allegedly missing key situation. The group was only able to enter the room after a staff member brought them a key. According to McCraw, the classroom doors to rooms 112 and 111 were never “secured,” since there was no way to lock the doors from the inside.

More recently, a report based on the Texas Department of Public Safety claimed a local Uvalde officer had a chance to shoot the gunman before he ever entered the building. Shortly after, Uvalde Mayor Don McLaughin released a statement denying that piece of information.

“The report by the Advanced Law Enforcement Rapid Response Training Center (ALERRT) does not give a complete and accurate account of what happened at Robb Elementary School,” said McLaughlin.

As this clashing narrative persists, it seems likely that some of the responsible parties are lying, and that others are doing their best to obfuscate and cover up – every piece of new information tends to introduce new questions and confusion.

After weeks of local and state agencies refusing most requests to release information, the chairman of a Texas House committee investigating the Uvalde school shooting indicated on Tuesday that he would defy a local district attorney and release video from within Robb Elementary School to the public.

According to the Dallas Morning News, Lubbock Republican Rep. Dustin Burrows said on Twitter that he plans to show the more than hour-long video to victims’ families before releasing it to the public Sunday.

The 77-minute video was obtained and released on Tuesday by Austin American-Statesman and KVUE. The disturbing footage shows in detail dozens of sworn officers, local, state, and federal — heavily armed, clad in body armor, with helmets, some with protective shields — walking back and forth in the hallway, some training their weapons toward the classroom, texting, talking on the phone and even getting hand sanitizer, still not one of them manages to find the courage to order the lot to go into the classroom and protect the children locked inside with the shooter.

So much for the good guy with a gun trumping the bad guy narrative that Republicans always preach, it certainly did not help the Uvalde victims. More than an hour had to pass for a good guy, trained and shielded, to be able to stop the untrained bad guy… and only after the bad guy had already brutally slaughtered 19 innocent children with 100 rounds of his AR-15 rifle

Will the viewing of this video get the answers the people in Uvalde and the State of Texas are in desperate need of? Even if Uvalde’s school shooting gets clarified and people are held accountable, the precedent of what happened in the small southwestern county of Texas will perpetually taint the state’s law enforcement’s reputation and has instilled a culture of distrust amongst communities and state leaders all over the Lone Star State.

“People in Uvalde are angry,” said state senator Roland Gutierrez, a Democrat who represents the small city. “They want answers. They’re distrusting of law enforcement. The credibility of law enforcement is at stake,” he said. “They’re good people, but they just want honesty, man.”

Last Sunday, some 500 demonstrators gathered in Uvalde to march for the lives that were stolen from their community. Families of the slain wore matching custom-made t-shirts to commemorate the unthinkable. The protesters carried signs reading: “Bullets are not school supplies,” “You don’t need a gun to be powerful,” and “Hear their screams.” They chanted: “Not one more child” and “Qué queremos? Justicia! Cuándo? Ahora!” (What do we want? Justice! When do we want it? Now!) as the sun beat down.

A.J. Martinez, one of the kids who survived the attack, shared, “Right now I don’t feel safe anywhere. … I don’t want anybody to have to go through what my family and friends, or the community, went through.