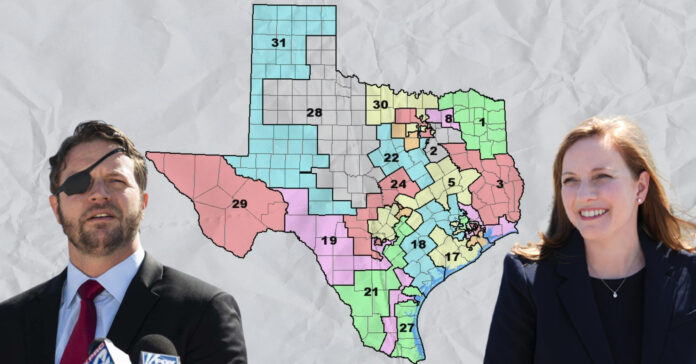 The first maps from the redistricting efforts have been released, and as expected they heavily favor Republicans. Here’s a list of winners and losers with the current lines.

Texas District 2 is so famously gerrymandered that even people who don’t live in the state can sometimes recognize it’s mishappen appearance as it snakes around the city to avoid racial minorities. Possibly conscious of all the ridicule, the new map would make the district less blatantly obvious without sacrificing any safety for Republicans. The proposed lines would now include a good chunk of Montgomery County, and continue to keep Crenshaw, a rising Republican star, in his U.S. House seat.

Lizzie Fletcher’s Democratic flip of District 7 has remained a high point in liberal Texas politics, and it looks like Republicans are willing to take the loss. Her district will become even more solidly blue and make it unlikely that Republicans will retake the seat any time soon. By extending her territory down in to Fort Bend, she will actually have one of the most diverse districts in the nation.

One of the two new districts in Texas will be District 38 in west Houston, and despite the increasingly liberal support of that electorate the new map would make it almost certainly a Republican stronghold. Stitched together from four other districts, it’s main demographic strength from the heavily white parts of Cypress, Tomball, and north of the Grand Parkway. Wesley Hunt, who previously lost to Fletcher, is expected to try for this new district. Considering that the growth of Texas’ population was almost completely from ethnic minorities, a court challenge to District 38 is guaranteed.

The other new district will come in Austin, and here it looks like Republicans are ceding the game. The new district encompasses heavily blue areas that no Republican is likely to even try and do well in. The same can be true in Dallas, where the other big Democratic flipper, Colin Allred is seeing his new fiefdom only grow stronger. Why are Republicans retreating from their previously held territory?

Overall, the new map still heavily favors Republicans through sheer numerical advantage. By pushing minority voters into the more safely blue districts, they can open up the ones that were starting to tip in 2020 to add more white and conservative voters. Crenshaw, Van Taylor, Michael McCaul, Chip Roy, Troy Nehls, John Carter and Beth Van Duyne all saw their districts almost fall to President Joe Biden, which can have long term consequences if suburban white support for the GOP begins to teeter. By compromising on a few urban districts, Republicans hope to outnumber Democrats in the rural and exurban ones.

For those who worry about metastasized partisanship, the new Texas map is all bad news. According to FiveThirtyEight, it ends up with 24 solidly Republican districts and 13 solidly Democratic ones. Only one true swing district will remain, District 15 in the Rio Grande Valley. The district is one of the few in actual flux. The area is a traditional Democratic stronghold because of the immigrant population but is also one of the places former President Donald Trump picked up support in 2020 thanks to conservative Tejanos. This means that the most exciting race in in the 2022 midterms could be in West Texas, as the battle over the future demographics of both parties happens in microcosm. Win or lose, at least it will be a fight.