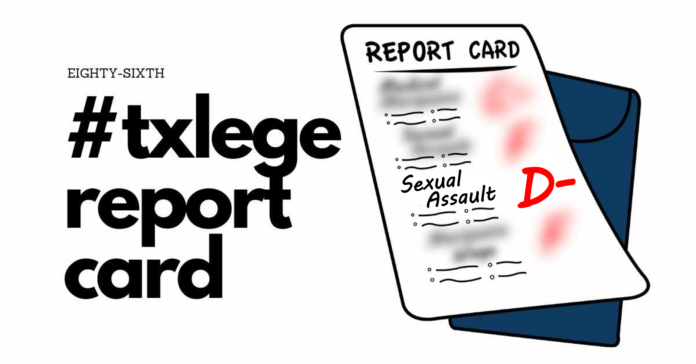 Texas legislators are commending themselves for passing a few long-overdue bills concerning sexual assault, but progress on sexual harassment and women’s safety proved deplorable at best.

In 2017, a movement against sexual assault and sexual harassment – particularly in the workplace – began to spread via the social media hashtag, #MeToo. The movement’s widespread exposure shed light on millions of people, many of them women, who came forward  to share their own personal stories of sexual harassment and violence.

The results following the first legislative session since the wave of #MeToo testimonies were underwhelming.

Legislators also passed House Bill 1590, which establishes the Sexual Assault Survivors’ Task Force. The force is responsible for facilitating communication and cooporation between state agencies that collect and analyze data and for providing policy reccommendations on methods of improving services for sexual assault survivors. Though lawmakers have applauded themselves for passing this bill, it came as a direct response to Rep. Donna Howard’s (D-Austin) 2017 legislation that required the implementation of a statewide tracking system for evidence collected in sexual offense cases. Howard’s bill requires tracking systems to be implemented by September 1, 2019.

Legislators’ actions spoke louder than words regarding sexual harassment efforts. Texas legislator Charles Schwertner (R-Georgetown) was unable to chair a committee in the Senate after sexual misconduct allegations ensued. Bad behavior that gets excused for lawmakers like Schwertner set the bar for addressing sexual harassment issues in the 86th legislature low.

Legislators were also unsuccessful in improving workplace culture by failing to pass House Bill 2279, which would have allowed individuals working at a company with fewer than 15 employees to file sexual harassment complaints with the Texas Workforce Commission. An identical bill, Senate Bill 46, made it through the Senate and was scheduled for a floor vote in the House on the last day for Senate bills to be heard but ultimately died as the clock struck 12.

Another crucial bill regarding women’s safety (SB 1804) was vetoed by Gov. Greg Abbott just days ago. The widely support domestic violence bill would have required bond information for domestic violence offenders to be sent to victims, as well as entered into a statewide database. SB 1804’s informative requirements would have better protected domestic violence survivors and community members that are currently vulnerable due to a lack of centralized data. Abbott said the legislation lost his support when “someone slipped in an ill-considered giveaway to a radioactive waste disposal facility.” However, the amendment Abbott was referring to would have simply delayed a surcharge and fee increase for a West Texas radioactive waste facility.

Though some productive steps were taken this session to protect women and end the all-too-common sexual violence exposed by the #MeToo movement, it is not enough. And we cannot allow legislators to lay back and congratulate themselves for their perceived job well done when there is still so much left to do.