Home Texas Legislature Texas Children can be charged with prostitution thanks to a veto from...
Facebook
Twitter
Email 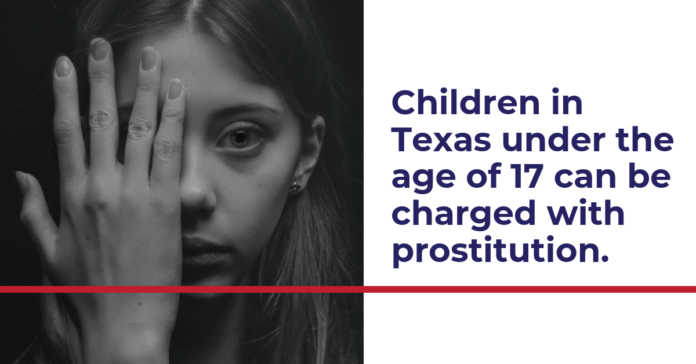 Children in Texas under the age of 17 cannot legally consent to sex, but they can be charged with prostitution, thanks to a veto from Gov. Greg Abbott.

House Bill 1771 aimed to change that by prohibiting “prosecuting or referring to juvenile court” child sex trafficking victims. Instead, the unanimously supported legislation would require law enforcement officers to connect the minor to a parent or to the Texas Department of Family Protective Services.

Just one day before the deadline, Gov. Greg Abbott vetoed the bill, justifying his veto with foggy speculations that the bill “takes away options that law enforcement and prosecutors can use to separate victims from their traffickers.” He also alleged the bill would “provide a perverse incentive for traffickers to use underage prostitutes, knowing they cannot be arrested for engaging in prostitution.”

Advocates argue the best way to remove minors from these dangerous situations is to provide them with resources to help, not criminalize and isolate them in juvenile systems.

A serious concern identified with current law is that children who are victims to sexual predators are being punished by the legal system, rather than receiving rehabilitative help and treatment. This bill would remedy that by providing a path to resources and services for child victims.

Under House Bill 1771, the Child Sex Trafficking Prevention Unit and the governor’s program for victims of child sex trafficking, in consultation with a caseworker, would develop a customized plan for the child’s rehabilitation needs. Caseworkers would also assist the child with housing needs.
The bill’s author, Rep. Shawn Thierry, D-Houston, hopes to focus on changing the law when she returns next session.