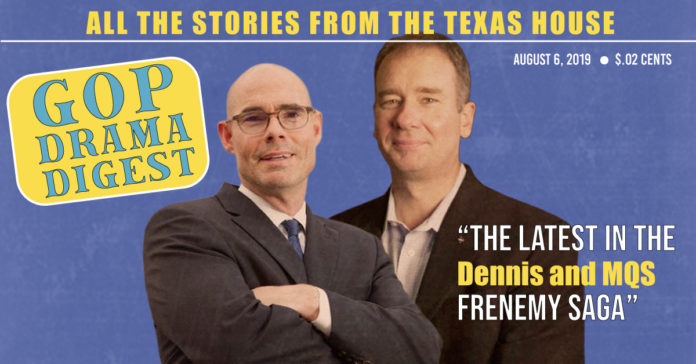 “Bonnghazi” and “Bonnen Gate” are the terms being used to describe the political scandal splintering the Texas House. On June 12, House Speaker Dennis Bonnen (R-Angleton) and GOP caucus chairman Rep. Dustin Burrows (R-Lubbock) met with hardline conservative activist and leader of Empower Texans, Michael Quinn Sullivan. The details of the meeting are disputed, and members of the Texas House of Representatives are demanding answers.

Here’s what you need to know:

THURSDAY – July 25, 2019: Michael Quinn Sullivan, publishes a blog post recounting the June 12 meeting, accusing Rep. Burrows and Speaker Bonnen of planning to target a list of 10 Republicans in the 2020 primary elections. Sullivan alleges he was offered House media credentials in 2021 for his Empower Texans’ publication, Texas Scorecard, if the group would go after the list of incumbents.

FRIDAY – July 26, 2019: Bonnen sends an email to House Republicans, confirming the meeting took place. Though Bonnen does not directly address the alleged list of 10 members, he refers to Sullivan’s post as an “ongoing effort to divide and ultimately destroy the Republican majority in the Texas House.”

The story makes no sense and I have no idea what’s going on. But, damn, the explosions are awesome. https://t.co/j66RkyNEYR

MONDAY – July 29, 2019: Bonnen releases a public statement, forcefully denying Sullivan’s allegations. “Let me be clear. At no point in our conversation was Sullivan provided with a list of target Members,” Bonnen said in his statement.

WEDNESDAY – July 31, 2019: With no response from Burrows, Sullivan announces that he has a recording of the June 12 meeting. Sullivan threatens to release the recording—either partially or entirely—if Bonnen and Burrows do not “recant their false claims”. Until then, Sullivan offers to allow any “Republican legislators, party officials, and conservative movement leaders who may feel they are impacted by the recording” to contact his office and listen to the audio in the presence of his lawyer.

WEDNESDAY – July 31, 2019: Bonnen calls for Sullivan to release the recording in its entirety.

Ok #txlege twitter, what is it?
Results are binding.

no one:
absolutely no one:
Dennis Bonnen: how can I completely torpedo my career

THURSDAY – August 1, 2019: Three Republican lawmakers, one of whom was on the alleged target list, told The Dallas Morning News they had listened to the recording: Rep. Travis Clardy (R-Nacogdoches), Rep. Steve Toth (R-The Woodlands), and Rep. Jonathan Stickland (R-Bedford). All three lawmakers relayed the recording largely confirmed Sullivan’s account of the meeting.

Rep. Clardy, who was named as a target, called Bonnen’s comments about both House Democrats and Republicans “disparaging”.

“A list was provided during the meeting and the speaker referenced the list multiple times. Honestly I was caught off guard and shocked. I supported Dennis from day one and am embarassed how poorly his actions reflect on the Republican Party,” Rep. Toth said in a statement.

Rep. Stickland said, “I am shocked at the public lies and manipulation the speaker has tried to engage us in. Texas deserves truth, honesty and a better moral compass than Bonnen is giving us.”

Having all the evidence is always the best way to sort things out. I agree w/@RepDennisBonnen and colleagues on both sides of the aisle that the entire recording should be released. #txlege https://t.co/IaY5FslWMI

Today’s award for Best Response to #Bonnengate is from @SarahforHD134, who doesn’t plan to listen to the audio. “That would require me to have to meet with Michael Quinn Sullivan.” (h/t @jayphoward) https://t.co/Ti7Fd3f3AV

? “No one else was in the room where it happened” ?https://t.co/Q4LvSy8oVV pic.twitter.com/UDOew74qkz

Anyone think Dennis Bonnen is enjoying a shower beer this morning?

MQS: I was offered an under the table deal by a government official. Here is the evidence.

Texas Media: how dare you record a private conversation with a lawmaker. We can’t trust anything you say or do. pic.twitter.com/gofhpdDxPP

Michael Quinn Sullivan of Empower Texans recorded an hour-long closed-door meeting with Texas Speaker of the House Dennis Bonnen. Those who have listened to the recording say that it details potential criminal bribery as well as vulgar and vile attacks against other members … pic.twitter.com/9kDOz69RQ1

With control of the Texas House at stake, many Republican representatives are staying quiet or conferring privately. Other members have plans to listen to the recording in the coming days. Rep. Burrows has maintained radio silence, and House Democrats are waiting for a response from Michael Quinn Sullivan on releasing the recording in its entirety.