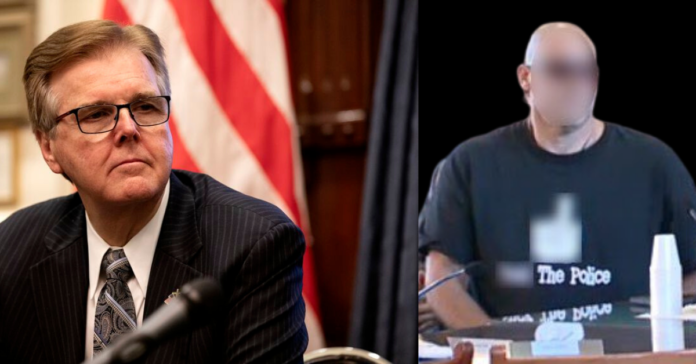 Last week, Lt. Gov. Dan Patrick, who presides over the Texas State Senate, publicly said he would remove all witnesses from legislative committee hearings who were wearing clothing that displayed “vulgar” language.

The issue arose during the State Senate Affairs Committee meeting Wednesday at the Texas Capitol when a witness wore a t-shirt that had a printed anti-police sentiment.

During the hearing’s section on firearm legislation, a witness who introduced himself as Joseph Walker testified to the Senate Affairs Committee in favor of the legal carry of firearms without a state-issued license.

The witness wore a black shirt with the words “F*** the POLICE” printed on the front and an image of an outstretched hand holding up its middle finger positioned below the lettering.

Ending his statements on a personal note, the witness then criticized Rep. Dan Crenshaw (R-Texas) and the director of Texas’ Alcoholic Beverage Commission, saying that they could “both go “f*** themselves”

At the end of all the witnesses statements, Senate Affairs Committee Chair Sen. Bryan Hughes (R-Minelo) gently admonished the witnesses’ decorum by thanking every other witness for being there and providing their respectful testimony.

However, following the 10 hour hearing, Patrick, who is outspoken in his support of the police, took to twitter to express his disappointment in the witness’ attire:

“Outraged to see this T-shirt at a Senate Hearing Thur. Future witnesses beware. No one will ever be allowed to wear such a vulgar shirt in a Senate hearing again-especially one that denigrates the brave men & women of law enforcement. Want to take me to court? Ok. Make my day.”

These statements made by Patrick launched a debate over the extent of free speech and where it has limits.

In response to his statement, many First Amendment advocates spoke out against his stifling of free speech, with several claiming that this would be considered unconstitutional “viewpoint discrimination.”

However, others spoke on Patrick’s authority over the Senate as lieutenant governor to uphold decorum and praised him for his defense of decency.

In 1971, the conviction and jail sentencing of Paul Cohen was overturned by the Supreme Court after Cohen wore a jacket that stated “F**** the Draft” inside a state courthouse.

“Surely the State has no right to cleanse public debate to the point where it is grammatically palatable to the most squeamish among us.”