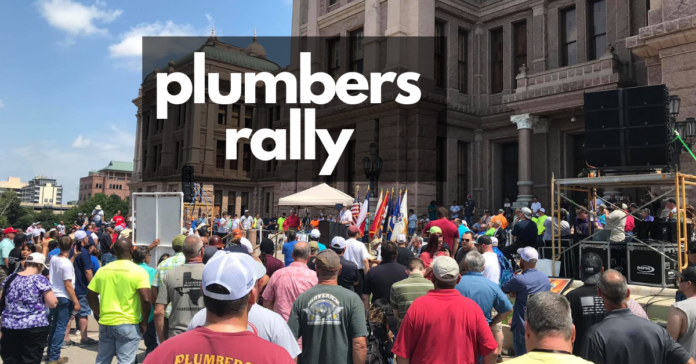 AUSTIN, TX – Nearly 10,000 Texas plumbers and their supporters rallied in front of the Texas Capitol today calling on state legislators to ensure the Texas State Board of Plumbing Examiners remains a stand alone agency.

The plumbers decided to hold the rally after lawmakers failed to renew the licensing board, which regulates the industry, in the 86th legislative session.

Panicked, they began organizing, calling on Governor Greg Abbott to hold a special session to ensure that this board did not shut down September 1, 2019.

Abbott assured the group that there was nothing to worry about on Twitter. He ended up extending the board with an executive order the day before a June 13 rally.

Regardless, the plumbers rallied in Austin, Texas. According to Mary Conger, an organizer of the rally, the turnout was about 10,000. Some described the rally today as a “thank you rally” to the governor, while others called for more organized legislative action from now on.

Oversight and autonomy came up during the rally countless times. At one point during the panic, the thought was that the plumber licensing would be incorporated into the Texas Department of Licensing and Regulation. Plumbers will be working next session to push independent control over the Texas State Board of Plumbing Examiners

After the two hour rally, the message was clear: Texas plumbers are aware, they are politically active, and they demand to be taken seriously. The fight is not over.