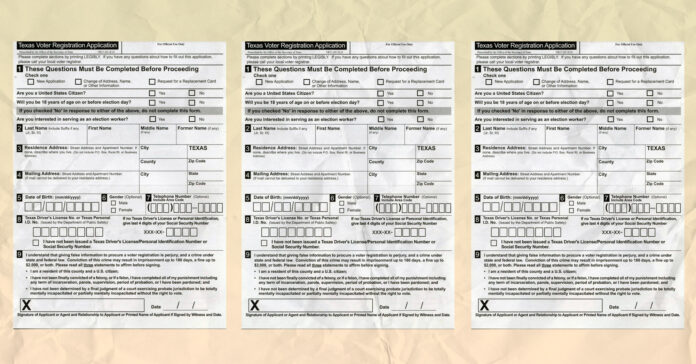 Groups that help people register to vote don’t have an easy job, but it seems like the Texas Secretary Of State Office has been making their days a little harder by limiting the number of voter registration forms that they’re able to give out per request.

According to Sam Taylor, assistant secretary of state for communications, the office has been experiencing difficulties when it comes to obtaining paper due to supply chain issues, meaning that they’re being forced to give out fewer voter registration forms this year.

“We are limited in what we can supply this year, because of the paper shortage and the cost constraints due to the price of paper and the supply of paper,” said Taylor.

Grace Chimene, president of the League of Women Voters of Texas, confirmed to the Houston Chronicle that the lack of registration forms is not unusual ahead of election season, but this year the issue has been particularly troublesome for newly naturalized citizens.

“The League in Houston registers about 30,000 new citizens every year through these ceremonies in the past,” Chimene said.

Right now, the office imposed a limit to a max. of 2,000 forms per request.

Houston Mayor Sylvester Turner — an outspoken critic of Texas voting restrictions — said in a statement, “This is embarrassing, unacceptable and must immediately be addressed…Texas has refused to join 41 other states in offering safe and secure online voter registration, which has been proven to be more accurate and much more cost-effective.”

Mayor Turner added, “Before President Lyndon Johnson passed the Voting Rights Act in 1965, Texas continued to collect the poll tax. Without the pre-clearance protections of the VRA, Texas is again abusing the fair administration of elections and the ability of Texans to register to vote.”

The League of Women Voters of Texas is only one of the many associations that work towards getting democracy to all corners of the state, which has become a much more complicated task due to paper shortage and the passing of SB1, which changed the penalty for illegal voter registration from a class B misdemeanor to a class A misdemeanor, meaning that forms needed to be updated, rendering the old form useless or in danger of becoming invalid.

After several stories regarding this issue were published, Taylor clarified that forms using the old format may not necessarily become invalid.

Taylor closed by saying that the Secretary of State’s office is treating all organizations the same and that they’re trying to fulfill the requests as fast they can, but the fact remains that they simply don’t have the supply to honor every single request for free applications.