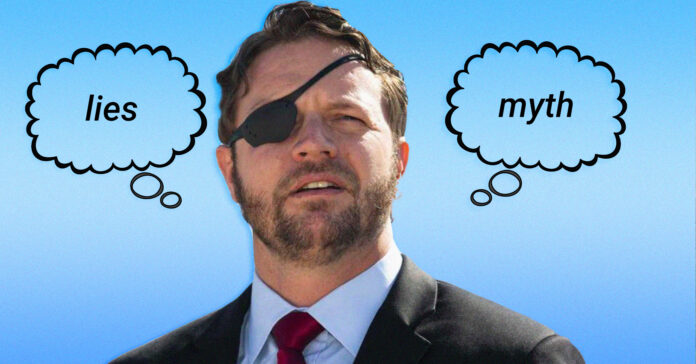 In his most recent Dan-venture we find our Representative live on “Sunday Night In America” discussing with host Trey Gowdy the efforts by the Biden administration to sue the state of Texas over “election integrity.”

According to Attorney General Merrick Garland, it violates the Civil Rights Act, based on its new restrictions in voting. The law is being attacked for allegedly muddling people’s right to vote.

However, Crenshaw believes the law is “very transparent,” and boring. “It just cleans things up, cleans up the process,” said the Representative. “It does things like make all the early voting times the same across counties, so people don’t get confused [and] put additional I.D. requirement on mail-in ballots,” Crenshaw said.

In the past Crenshaw has compared voting by mail to “playing with fire” and resisted the expansion. Texas even challenged a Harris County plan to send applications for mail-in ballots to all it’s voters, while GOP leaders continued to urge their voters to fill out its applications, as reported by The Texas Tribune.

Even though that was last year, it appears things have not changed.

Crenshaw continues the interview by regarding the Democrats’ concerns that the law suppresses people’s right to vote as a liberal attempt to push a “myth.”

“One, the voter suppression lie is just that, a lie. It’s a myth. Number two, no one believes the myth. About 80% of voters believe in voter I.D. and 47% of voters also believe we have too lax of voting laws to prevent fraud. The Texas law doesn’t do any of that,” Crenshaw explained, as reported by Fox News.

Afterward Crenshaw told Gowdy the Democrats’ efforts to undermine election validity was all a ruse.

“I’m sick of the pendulum swinging this way. It is clear the Democrats are setting this up because they know that they’re going to get blown away in 2022. They absolutely know that. And they want to be able to say that the only reason they lost is because they couldn’t pass these laws that basically mean you can drive through at 3 AM and vote. That’s honestly the kind of things they said,” Crenshaw said.

Crenshaw ended the interview calling out Democrats’ for crying “racism” as their only argument.

“My question to Democrats is what’s your counterproposal?” Crenshaw continued. “They don’t offer counterproposals because they don’t want fair elections. That’s the only thing I can come up with.”