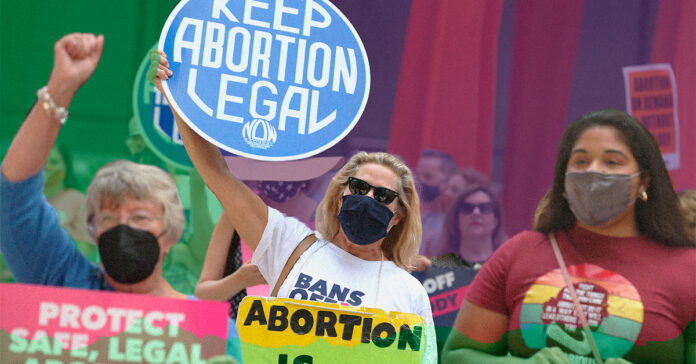 Since their state passed its six-week abortion bill in September, Texans have headed north to Oklahoma in droves. But though it has emerged as a critical access point, Oklahoma is on the verge of passing its own strict abortion ban, and clinics in nearby states are bracing for a new surge in patients seeking care. Many worry that without Oklahoman clinics, they will be unable to account for everyone hoping to obtain an abortion.

Oklahoma’s state Senate passed a bill earlier this month that essentially copies the legislation, enforcing a ban on abortions past six weeks through private civil lawsuits that target abortion providers and anyone who “aids and abets” someone obtaining the procedure after that mark. Last week, the House passed an even stricter bill. It would use the same model of enforcement but ban all abortions, unless one was being performed to “save the life” of the pregnant person. If passed, it would be the strictest active abortion ban in the country.

Both bills are awaiting hearings in a second chamber — something local advocates expect could happen as early as next week — and the governor is expected to sign whichever ban reaches his desk first. Both would take effect immediately upon signing. Much like Texas’ ban, the bills in Oklahoma are expected to survive legal challenges because of their unusual punitive structure, even though they violate the principles established in Roe v. Wade, the 1973 case that guaranteed the right an abortion that could be weakened or upended this summer.

The laws would decimate access for Oklahomans and have massive ramifications for people seeking abortions across the region. Abortion providers in nearby states say regional infrastructure has already been stretched to its limit.

“These state-level laws have an impact that goes beyond their state borders,” said Kari White, the lead investigator of the Texas Policy Evaluation Project, which has studied the impact of Texas’ six-week abortion ban. About 1,400 Texans have gone to another state for an abortion each month since September, per her research. About 45 percent are traveling to Oklahoma.

“We are already stretched to our limits trying to see Texas folks,” said Rebecca Tong, the co-executive director for Trust Women, which operates an abortion clinic in Oklahoma City and another Wichita, Kansas. “This? It will make it worse. It will make it much, much worse.”

Since Texas’ abortion ban took effect, the Trust Women Oklahoma City clinic has seen mostly Texans. Wichita’s clinic has seen a combination of Texas-based patients as well as Oklahomans who were already unable to get care in their home state because clinics no longer had enough room for everyone. In Kansas, they are trying to hire more people to accommodate the demand. But finding support staff has posed a challenge, Tong said.

And even if the clinic operated at maximum capacity, she fears, it wouldn’t be enough.

“Even if we ran the clinic 24 hours a day 7 days a week, there would be people turned away. There would be people unable to get an appointment, unable to travel and some people who don’t make it to the point of calling a clinic,” Tong said. “It is not easy to reach us right now. It is not one simple phone call. People have to call multiple times because our phones are just ringing endlessly — and they have for the past six months.”

Data from the Centers for Disease Control and Prevention as well as data from the Guttmacher Institute suggest that close to 5,000 abortions are typically performed in Oklahoma each year. Prior to Texas’ six-week ban taking effect, about 55,000 abortions per year occurred in that state.

If care is unavailable in Oklahoma, it’s not entirely clear where people will go or who will have capacity. Kansas, just north of Oklahoma, has four clinics. Arkansas, to the east, has three. Both have already been seeing a surge in patients coming from Texas.  And access in those states is tenuous, too. Kansas voters are weighing a constitutional amendment this August that would remove the state’s abortion protections. Arkansas has passed a so-called trigger law that could end access to the procedure if Roe v. Wade is overturned.

“It is going to be incredibly difficult for the facilities in these areas to absorb the volume, even if it were just Oklahoma alone,” White said.

New Mexico and Colorado, to the west, have fewer restrictions on the procedure and could become destinations for people seeking abortions. But providers there worry that they are already at their limit .

“We are trying to absorb as many as we can,” said Dr. Christina Tocce, the medical director of Planned Parenthood Rocky Mountains, who is based in Denver. “But that being said, the sheer volume is formidable. And we are not going to be able to serve every patient that needs abortion care.”

There is another pressure point for Colorado, specifically. Idaho has also enacted a Texas-inspired six-week ban. For patients seeking care, and who can afford the airfare, Boulder or Denver — cities with direct flights to Boise and Idaho Falls – could be the most viable option.

The crush of patients and shortage of providers is already affecting what kind of care is available. Since September, clinics in all the states neighboring Texas and Oklahoma have reported longer wait times for patients seeking an abortion — at least two weeks, if not three. That pushes many patients out of the first trimester, when medication abortion is a viable option, and into the second trimester, when the only choice is a more expensive, more invasive surgery.

That has another ripple effect: Surgical procedures take longer, and clinics are already short on time to see everyone.

“What’s going to happen in Oklahoma, it will very likely increase our volume,” said Dr. Eve Espey, who chairs the OB-GYN department at the University of New Mexico and founded its center for reproductive health. “There are only three clinics in Albuquerque that provide abortion care, so there’s a limit. We’re talking about how we can ramp up more. We thought we’d have more medication abortion, and that’s not happening.”

She, along with other providers, worries that wait times will only grow longer with fewer clinics providing care for more people, pushing more abortions later in pregnancy.

So far, many people have been able to travel for care, often at great personal expense. But increasing restrictions could make those barriers eventually insurmountable, White said – especially for those who cannot afford a plane ticket, or who have never been on a plane.