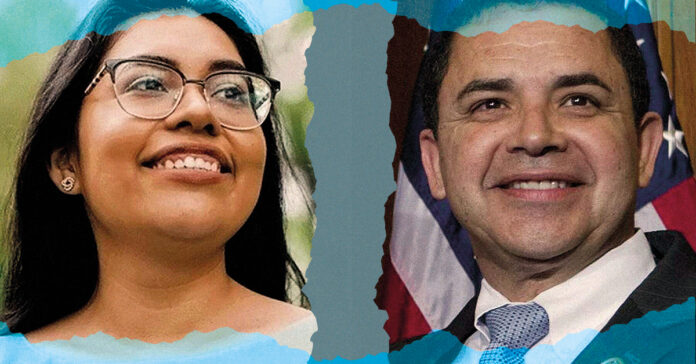 WASHINGTON, May 4 (Reuters) – The Supreme Court’s leaked draft opinion has injected new urgency into a Texas primary that pits the House of Representatives’ lone anti-abortion Democrat against an advocate of abortion rights.

Progressive Democratic challenger Jessica Cisneros on Wednesday called on top House Democrats to drop their support for Representative Henry Cuellar, an 18-year-incumbent, over his anti-abortion stance, ahead of a May 24 runoff primary.

The draft showed the court could be ready to overturn the 1973 Roe v. Wade decision that legalized abortion nationwide, and the leak sent Cuellar scrambling to square his position with his party.

“With the House majority on the line, he could very much be the deciding vote on the future of our reproductive rights and we cannot afford to take that risk,” Cisneros, a 28-year-old immigration attorney, said in a press release on Wednesday.

“As a Catholic, I do not support abortion, however we cannot have an outright ban,” Cuellar said in a statement on Tuesday evening.

Cuellar, 66, was the only House Democrat to vote against the Women’s Health Protection Act in 2021, which would have prohibited government restrictions on access to abortion.

Pelosi said in March that she supports Cuellar and all Democratic incumbents “from right to left. That is what I do.” Her office did not immediately respond to a request for comment on Wednesday.

Clyburn was attending a Cuellar campaign event on Wednesday. His office did not respond to a request for comment. A Hoyer spokesperson did not comment directly on Cuellar.

Nationwide, 63% of voters say they support candidates who oppose banning abortion, according to a Reuters/Ipsos poll on Tuesday. Read full story

A Cisneros victory over Cuellar in the primary could threaten the party’s hold on the seat in the Nov. 8 general election. Democrats are already concerned about Democratic President Joe Biden’s low approval ratings amid voter worries about inflation, COVID and immigration.

The primary result may also be viewed as a signal about how abortion politics could play out nationally in November. The Supreme Court leak could turn Texas Democrats against Cuellar, given his opposition to abortion.

“Once you start saying that what’s at stake is not limits on abortion but whether women should have access to abortion … there’s no gray areas here,” said James Henson, director of the Texas Politics Project at the University of Texas in Austin.

Even in a district that tends to be more moderate than the rest of the Democratic Party, the possible overturning of Roe “gives Cisneros something to talk about that Henry Cuellar doesn’t have much room to hide on.”

(Reporting by Moira Warburton and Richard Cowan in Washington; Editing by Scott Malone and Cynthia Osterman)