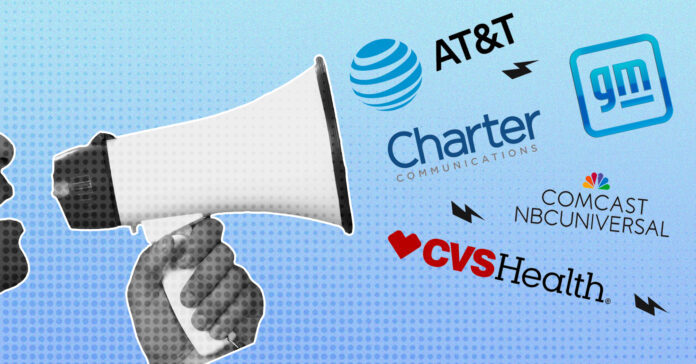 The recent news of Texas’ abortion ban has reached every corner of the world, a bill that is now competing with the most restrictive countries in terms of women’s healthcare that continues to shock the world.

The Texan law shifts the power balance and enables citizens to enact this legislation on other fellow citizens, by placing a $10,000 bounty on anyone who helps a woman obtain an abortion in Texas, and regardless of rape or incest, private citizens can collect the bounty by filing a lawsuit.

But prohibiting women from deciding over their own bodies -banning all abortions after six weeks even before most actually know they are pregnant- has not been a task made entirely possible by Texan authorities, companies have been pushing such efforts as well.

Both corporations have been major “champions for women’s rights” with AT&T, for example, having gender equity and the empowerment of women” as one of their core values and NBCUniversal announcing in 2020 a year-long advertising campaign focusing on “women’s empowerment.”

According to Popular Information, many other major contributors to the sponsors of Texas’ abortion ban are prominent national companies, which include CVS Health with donations up to $72,500, UnitedHealth Group with $90,000 in donations, and Health insurer Anthem with $87,250 over the last three years.

Surprisingly, most of the donors are health-related companies, and almost all of them have been outspoken on social media claiming to support the advancement of women’s rights, never failing to post images with their logos, celebrating international women’s day.

Worldwide, the Texas abortion ban has been facing serious backlash, not only for the regression it represents for women’s access to health and the exercise of their human rights but also for the implications it entails, on the application of justice.

The expansion has far-reaching legal implications, as reported by the Texas Tribune, by challenging the very notion of what a court is for and emboldening civilians to enforce the law, a duty traditionally left to the government. It’s also a reversal by Texas Republicans on tort law, in which they have typically sought to limit the ability to sue, not expand it.

This unprecedented law enables people to punish others for not agreeing with their own personal beliefs.

The largest contributor to SB 8, for example, is Texans for Lawsuit Reform, a conservative political organization that has donated nearly $2.3 million to the legislation that allows anyone to sue anyone that helps a woman get an abortion.

The group’s leadership includes nine men and no women.