Home Women's Rights “They taught Us to Fight for What We Believe In”: How Texan...
Facebook
Twitter
Email 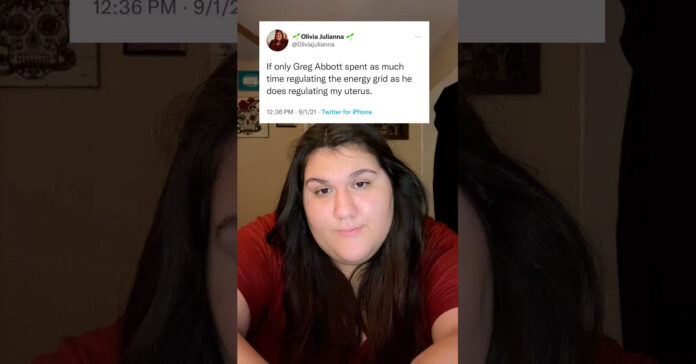 The start of September came with what many Texans seem to see as the dawn of women’s healthcare rights, as the most restrictive ban on abortion in the country leaves thousands of women without the possibility of terminating a pregnancy after six weeks.

The legislation, however, not only imposes strict conditions on a woman’s right to choose, but it also enables citizens to enforce the law by offering a $10,000 reward to whoever carries out a successful lawsuit against abortion providers or others who aid or abed an illegal abortion.

As part of their intention to collect as many lawsuits as possible, Texas Right to Life -the largest anti-abortion group- created a whistleblower website encouraging people to anonymously rat out violations to the restrictive law.

But what seemed to be an open door to a very noxious witch hunt, was successfully stopped by Texan TikTokers and coders joining forces to “do the right thing.”

“They’re trying to use the internet to retaliate against people who were raised on the internet”, said 18-year-old Olivia Julianna, a TikTok activist from Sugar Land “This website, if we can mess with them in any way, if we can stop even one woman from having a lawsuit filed against her or waste even a second of their time, we need to do it.”

Olivia is part of the leadership of a group called “Gen-Z For Change” who according to the Houston Chronicle immediately took to social media to sabotage the site by flooding it with false reports and other information — some suggested anti-Gov. Greg Abbott sayings. Others recommended off-the-wall responses or nonsense.

“It would be really, really bad and morally wrong of all of you to go to ProLifeWhistleblower.com and send in an anonymous tip that is fake,” Olivia sarcastically told her more than 137,000 followers in a TikTok video.

As the message quickly spread through social media, others followed.

“I just think it’s such a smart and wonderfully appropriate way for young people to exercise their power,” said former state Senator Wendy Davis, who is known for her 13-hour filibuster of an anti-abortion bill in 2013.

Even GoDaddy, the site’s former hosting service decided to terminate its relationship with Texas Right to Life, stating that the group violated its terms of service by collecting personal data without the person’s consent.

But besides having previously joined forces to support the Biden-Harris Campaign, perhaps the most interesting fact of “Gen-Z for Change” is that almost a third of their members are under 18 and can’t vote, which according to them is no excuse to take action.“I’m a fourth-generation Texan. I’ve lived here my whole life. I’m also a Mexican-American,” Olivia said. “Me and all other women and immigrants and Mexican Americans and people of color and Gen Z in Texas are not going to stop until these people who keep trying to take away our autonomy and our rights are out of office.”

Check out some of Olivia’s popular TikToks, here she makes a list of all the women in favor of the anti-abortion bill.

And here she’s teaching a Texas Representative how the ERCOT is regulated.