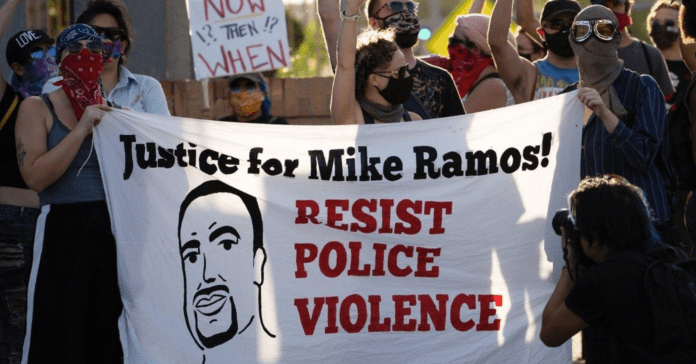 The Austin Police Department released video footage Monday of the fatal police shooting of Mike Ramos, an unarmed Black and Latino man who was killed as he pulled out of a parking space in April after officers first shot him with “less-lethal” munition.

Ramos’ name has become a rallying cry in Texas during the ongoing protests against police brutality and racial injustice that followed George Floyd’s death in Minneapolis. The videos show Ramos pulling out of the parking spot before turning right and stopping as officers follow the car, pointing their rifles toward the driver’s side of the vehicle. The release of the footage spurred protestors to gather at Austin police headquarters Monday night, according to the Austin American-Statesman.

An attorney for Ramos’ mother and Austin-area activists say the videos show the shooting was not justified.

“The first thing that stuck out to me is what I did not see and that was any justification for the shooting. That is glaringly absent from the video,” attorney Scott Hendler told Austin radio station KUT. “What’s clear is that there’s nothing Mike Ramos did to justify Officer [Christopher] Taylor opening fire and killing him.”

Attorneys for Christopher Taylor, the officer who shot and killed Ramos, said that based on their perceptions of the officers’ reactions, law enforcement was “in fear that Mr. Ramos’ vehicle was going to put them in danger.” An Austin Police Department report said that Ramos intended to use the moving vehicle as a deadly weapon and Taylor was justified in shooting him as a result.

“At the moment Mr. Ramos sort of drives forward shows that we believe they believed they were in fear of serious bodily injury or death or something along those lines,” said KenErvin, one of Taylor’s attorneys.

Ramos’ death brought out tensions that have long plagued the state’s capital, a place that is recognized for its moments of progressivism yet has deep-rooted racial biases.

The release of the videos depicting Ramos’ death comes two days after the death of Garrett Foster, an armed white demonstrator who was protesting police brutality in downtown Austin when an unnamed, armed driver shot and killed him, according to The New York Times. The shooter in that incident has cooperated with police and was released, according to the Austin American-Statesman. Austin police did not answer The Texas Tribune’s questions about that shooting Monday.

Travis County District Attorney Margaret Moore announced last week that she will not bring Ramos’ case in front of a grand jury during her term, which is set to end after she lost her reelection bid to Democratic primary challenger José Garza. Moore’s decision, which also affects the case of Javier Ambler — an unarmed Black man killed by Williamson County law enforcement last year — effectively delays criminal charges against any officers involved in either shooting.

Austin residents in the past few months have pushed for reforms to police conduct and cuts to the department’s budget. The City Council in June asked for some police budget cuts, banned the use of “less-lethal” munitions by law enforcement at protests and limited officers’ use of deadly force.

Meanwhile, hundreds of Austinites called in to a City Council meeting Thursday to advocate for significant police department budget cuts that exceed the proposed $11.3 million reduction. Some callers proposed cutting the budget in half, and others said the department should eliminate its firearms, according to the Austin American-Statesman.

The five videos released Monday, which include a version in Spanish, depict officers’ encounter with Ramos. One begins with a 911 caller alleging that Ramos and a woman were using drugs inside a car in an apartment complex parking lot. The caller first says Ramos is pointing a gun at the woman and later says he is holding up the gun. The caller also describes Ramos as wearing a white shirt. But Ramos is shown to be wearing a red shirt. The Austin Police Department confirmed in May that no gun was found in Ramos’ possession, according to the Statesman.

Before confronting Ramos, eight police officers are shown on video convening to discuss a strategy. They mention there is one entrance to the parking lot that they plan to block off with their vehicles.

The officers also mention that the car is one they have been “dealing with and actually looking for.” Austin police did not respond to questions Monday about what the officers meant by that statement.

During the encounter, police officers approach Ramos, who is inside the car, and demand that he step outside and put his hands up. Once he does, an officer tells him to lift his shirt up, turn around and walk toward the officer.

“You’re gonna get impacted if you don’t listen,” the officer says. “Walk toward me.”

Ramos complies with those demands, but the officer continues to tell him to comply as Ramos repeatedly asks what he did.

“I can’t explain it now, Michael, I’ll explain it in a second, but you need to turn around,” the officer says.

Ramos tells the officers he “ain’t got no fucking gun, dog” and asks them to not shoot before Officer Mitchell Pieper fires a lead pellet-filled bag, known as an impact munition considered “less lethal” by police, a few seconds later. After the shot is fired, Ramos reenters the car with the woman and proceeds to drive. Another officer, Christopher Taylor, fires three rounds at the moving vehicle, killing Ramos.

Taylor has been placed on administrative leave and is the subject of parallel administrative and criminal investigations by the Austin Police Department.

Ervin and Doug O’Connell, Taylor’s attorneys, declined to comment on Taylor’s case and said that the department has prohibited them from interviewing the other officers involved in the incident. They also said they were disappointed that the police department released the videos before a grand jury has been empaneled or a judge has ruled on the admissibility of the videos as evidence.

“I think this is because [the government wants] to dribble out evidence and control what the community is able to see in order to get some sort of strategic advantage,” O’Connell said.

They referred to another video released Thursday that shows the incident from the dashboard camera of Valerie Tavarez, another officer at the scene.

While that video does not show the car Ramos was driving, O’Connell said it depicts officers “scrambling to get out of the way of Mr. Ramos’ car.”

But the Austin Justice Coalition said the video released by the police department Monday “validates” Ramos and shows he was never an aggressive man.

“It’s frustrating and it’s sad to see this,” said Chas Moore, the group’s founder and executive director. “How senseless. This shouldn’t even be something that we’re talking about. If they just would have took a second to try to deescalate the situation because [in the video] they asked him to raise up his shirt and all this type of stuff, and he kept saying, ‘I don’t have a gun.’ So this is very frustrating.”