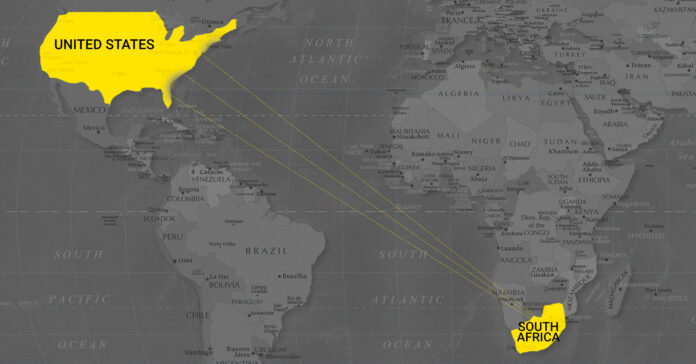 Geography expert, Texas Gov. Greg Abbott, recently suggested that immigrants from South Africa have been apprehended for “crossing our border illegally”, and he – not-so-surprisingly- is being mocked on social media for it.

In his latest attempt to diss President Joe Biden on immigration, Abbott criticized Biden’s decision to restrict travelers from eight southern African countries from entering the country in an effort to slow transmission and give experts more time to assess the new COVID-19 variant, Omicron.

In a tweet, Abbott calls out Biden’s Hypocrisy, linking the precautions to stop Omicron variant from spreading internationally to the migrant crisis on the U.S. – Mexico border.

South Africa is 9,000 miles from Texas, is separated by the Atlantic Ocean, and a flight alone is around 18 hours. Abbott might have confused South Africa with the continent of South America, or clearly knows something the rest of us don’t, geography-wise.

Either way, he signed his own conviction and has been publicly roasted by fellow politicians.

Including New York Democratic Sen. James Skoufis, who tweeted: “Greg Abbott can see South Africa from his house! Stay in school, kids,” and South African politician Ashor Sarupen, who tweeted, “Apparently, as a consequence of continental drift and some seismic activity, South Africa now shares a border with the US. Either that or Greg Abbott is just demonstrating his American level of geography skills.”

All jokes aside, there is data that dismantles Abbott’s claim.

Aaron Reichlin-Melnick, policy counsel at the American Immigration Council and former immigration lawyer, tweeted:  “From fiscal years 2007 to 2020, there were a grand total of 44 arrests of South African nationals in Border Patrol sectors along the Mexico-Texas border – an average of 3 a year.”

She also reminds us that since the variant, on Thursday, there is almost no way to get to the border.

I hope Abbott can erase our doubts and tell us how to get to our country all the way from South Africa. Swimming perhaps?