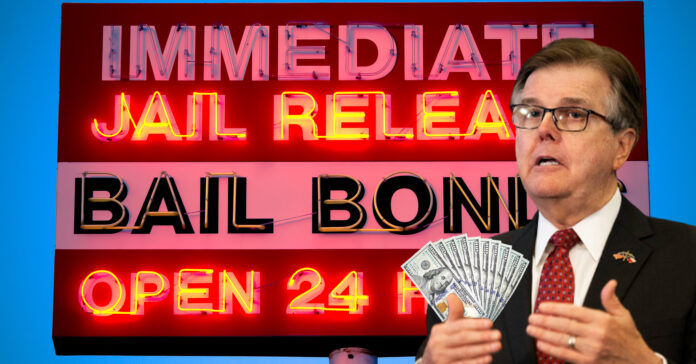 A controversial bail bond bill was signed by Governor Greg Abbott in Houston on Monday. The law is supposed to target violent criminals, but it is also heavily supported by the bail bonds industry, which donated tens of thousands of dollars to Lt. Governor Dan Patrick before he made the bill a priority.

The Damon Allen Act (formerly Senate Bill 6) was pushed through in the second special session of the Texas legislature on the message that it would keep violent criminals off of the streets. The law was named for a state trooper who was shot and killed on Thanksgiving Day in 2017 by Dabrett Black. Black was out on a $15,000 felony bond at the time and had multiple violent incidences on his record. Abbott blamed the death on “socialist” judges who wouldn’t tackle the rise in violent crime in Harris County.

“These Democrat socialist judges, they do believe in letting people out of jail as opposed to keeping people in jail, and that is why you have more criminals, convicted criminals who are back out on the streets endangering public safety,” he said at the signing ceremony.

Among other things, the bill limits the ability of defendants to be released on cashless bonds. Cashless or low-cost bonds will be denied for violent offenses or offenses occurring while under bond. The new provision will take effect in December.

The law is likely to put more money in the pockets of the bail bonds industry, which makes millions off the practice of getting offenders out of jail. Texas industry leaders know that, and they made their wishes fairly clear in the form of donations to Patrick, who championed the bill through the Texas Senate.

Cash bail is a system that has long been criticized for preying on poor people. The new provisions about cashless bonds would not have prevented Black from being released. Groups like the Bail Project, who oppose the bail bond industry, came out strongly against the law.

“This legislation will further entrench racial and economic disparities in Texas’ criminal legal system without addressing the safety concerns of communities,” the organization said in a statement Monday.

During the special session, there was also a provision in the bill that would have blocked non-profit organizations from posting bonds for defendants. That provision was heavily opposed in the House and ultimately scrapped under worries that would lead to legal challenges. Like the cashless bond provision, it would have driven more defendants into the bail bond industry. State Sen. Joan Huffman (R-Houston) has said that she may try to revive the idea in a new bill in future sessions.