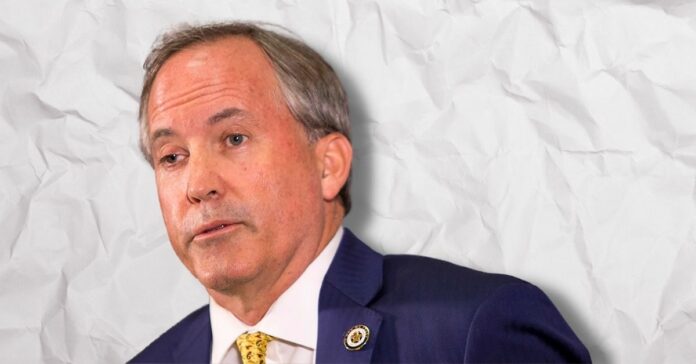 Texas Attorney General Ken Paxton continues to demonstrate an outright disregard for the law. His office has declined to enforce campaign finance laws and has – yet again – failed to file his own fundraising disclosure forms with the complete lists of donors.

The latest reports, which cover Sept. 30 to Oct. 29, show the Republican incumbent raised nearly $2.4 million, spent $5 million, and still has almost $3 million in his war chest.

Paxton declined to comment. But, in the past, his spokesman suggested that he thinks the agency’s work is governmental overreach, as reported by The Houston Chronicle.

“All of our decisions are guided by the same principle: We take the duty to defend the state seriously and routinely defend agency enforcement actions whenever consistent with our duty to uphold the Constitution,” the spokesman said. “However, where we determine those two duties are in conflict, our first obligation is to defend the Constitution and the basic rights it guarantees to each and every Texan.”

“As a sitting elected official, Paxton knows better than most what the rules are for filing a routine TEC report — he’s choosing not to follow them,” Garza campaign spokeswoman Marcy Miranda said. “The public deserves to know the deep pockets that are supporting criminally indicted Paxton’s campaign.”

In the end, Paxton ended up filing a corrected report Tuesday, a day late, and still… incomplete. The report does itemize donors and expenses, but it appears to only include individual donors’ last names, even though full names are required.

Last report cycle, some very prominent businessmen who have had their own brush with the law, gave big donations to Paxton’s campaign.

Paxton’s top donor, Montgomery Bennet, CEO of Ashford and Empower Texans donor, got in trouble in 2020 for securing tens of millions of taxpayer dollars in coronavirus disaster funds. Right up there with Bennet, was Holloway “Holly” Frost, founder and CEO of Texas Memory Systems. According to Harris County records, in 2009 Frost settled with a former employee after being accused of sexually assaulting and harassing her repeatedly for years.

In the latest report, Paxton’s top donor is far-right PAC, Defend Texas Liberty, which “believes life starts at conception, there are only two genders and children should not be indoctrinated in public schools.”

Defend Texas Liberty, is led by former state Rep. Jonathan Stickland, and is backed by hard-right donors like Tim Dunn and Farris Wilks, two billionaire oil and fracking magnates from the region. For years, they have quietly bankrolled some of Texas’ most far-right political candidates – helping reshape the state’s Republican Party.

The first time Paxton filed a late campaign finance report was at the start of the year when he took 13 days to file a corrected report after his initial filing failed to include the names of nearly 4,000 donors.

The second time was in July, Paxton failed to file an itemized list of contributors on time as required by law.

But, despite his legal fallouts and conspiracies, like a seven-year-old criminal indictment on felony security charges, cheating on his wife, being investigated by the FBI, or fleeing from the law, Paxton remains popular within the Republican Party and his donors seemed unfazed by his disregard for the law.

He is, however, considered the most vulnerable Republican in the upcoming elections, as recent statewide polling shows the current margin to be in single digits.

Garza might still be an underdog, but maybe Paxton’s latest fallouts will be enough to give her an edge in the race.