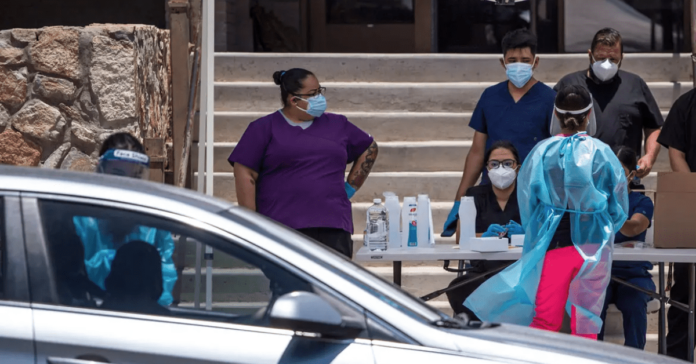 The number of Texans being tested for the coronavirus has fallen sharply in recent weeks, a trend that has worried public health experts as officials consider sending children back to school while thousands more Texans are infected each day.

In the week ending Aug. 8, an average 36,255 coronavirus tests were administered in Texaseach day — a drop of about 42% from two weeks earlier, when the average number of daily tests was 62,516.

At the same time, the percentage of tests yielding positive results has climbed, up to 20% on average in the week ending Aug. 8. Two weeks earlier, the average positivity rate was around 14%.

On Saturday, the state set a record for its positivity rate, with more than half of that day’s roughly 14,000 viral tests indicating an infection.

Taken together, the low number of tests and the large percentage of positive results suggest inadequacies in the state’s public health surveillance effort at a time when school reopenings are certain to increase viral spread, health experts said.

“Opening the schools is a really complicated problem, and the best thing we can do is get the number of cases down so kids can go back to school safely,” said Catherine Troisi, an infectious disease epidemiologist at UTHealth School of Public Health in Houston. “There are so many reasons why kids need to be in school, particularly younger kids, but we’re finding out more and more they can get infected, and the concern is them bringing it home and spreading in the community and spreading to teachers.

“I think the worst thing would be for schools to open, then close,” she said. “That really makes it hard on parents, that unpredictability, and there’s a lot of costs associated with opening the schools safely.”

The decline in tests may be driven in at least some places by a drop in demand. In Austin, health officials say fewer people are seeking tests through the city’s online portal and at local events. Local officials had been forced in late June to limit testing only to people who were showing symptoms of the coronavirus. Now, they are opening it back up to asymptomatic people.

And at sites in Dallas, testingnumbers have been declining over the past few weeks as locals utilize less of the city’s capacity.

The number of tests performed in Texas has “never been great,” said Vivian Ho, a health economist at Rice University and Baylor College of Medicine, but “it’s extremely troubling” that the numbers have dipped since last month.

“It’s troubling because we can guess at some of the reasons, but we’re not sure,” she said.

She suggested that some people may have been discouraged by long wait times for test results, or less concerned about the virus’ toll in Texas after a frightening peak in July began to flatten out.

A declining number of tests is a particularly thorny issue for schools, Ho said. “No public school has the resources to do testing under the current circumstances. There are huge class sizes and crowded hallways,” she said.

Researchers estimate that the true number of coronavirus cases could be more than 10 times the number of positive tests. As many as half of the people who contract the virus may never experience symptoms.

State data shows coronavirus hospitalizations declining in Texas, with some 7,500 coronavirus patients reported in Texas hospitals on Sunday. That’s down from a late July peak of about 11,000 — but remains well above Texas’ levels in the spring, when daily hospitalizations plateaued below 2,000.

In San Antonio, health officials last week said that a return to school would lead to new viral transmission and a growing body of evidence shows racial disparities in children’s susceptibility to severe illness from the virus.

“We know that children are less likely to be sick, but not immune,” said Dr. Junda Woo, medical director for San Antonio’s Metropolitan Health District, who said that on Wednesday there were about 80 children with coronavirus in local hospitals.

The role of children as disease vectors is less clear, Woo said. Studies show that children are less likely than adults to have infections severe enough to require hospitalization, but a recent report published by the U.S. Centers for Disease Control and Prevention found that Hispanic and Black children were much more likely to be hospitalized.

“Outbreaks will happen” in schools, Woo said. She likened schools to other group settings that have seen significant clusters of infection, such as nursing homes and daycares. “It’s going to seep in from the community as a whole.”

Gov. Greg Abbott said on July 31 that local health officials could not issue blanket orders that preemptively blocked schools in their jurisdictions from opening their classrooms for in-person instruction. That statement, which followed similar guidance from Attorney General Ken Paxton, came after about 18 local health authorities had issued such orders.

The move frustrated some superintendents, who said they were hamstrung in their ability to respond to the pandemic.

Abbott has said that local health officials could shut down schools that have COVID-19 outbreaks after they reopen.

Abbott also said school districts could ask for more time to limit the number of students learning in classrooms, on a case-by-case basis, beyond the current eight-week maximum set by the Texas Education Agency. And he told school officials that they could move their start dates later in the year with a school board vote, as long as they make up the time.

The Texas Education Agency has not yet released any specifics on which districts will be able to receive waivers to limit in-person instruction beyond eight weeks or under what circumstances. But it said it will penalize school districts for unlawful school closures, worrying superintendents who want more certainty of state support while handling an unpredictable pandemic.

Anthony Fauci, director of the National Institute of Allergy and Infectious Diseases, told reporters last week that communities with high levels of viral spread may be better off not reopening schools for in-person instruction.

“There are some areas, like we’ve seen over the last couple of weeks … of very significant viral activity,” Fauci said during an Aug. 6 briefing with journalists hosted by the Alliance for Health Policy. “Under those circumstances, you’ve got to use common sense … It may not be prudent to get the children back to school in those areas. So, you got to say, ‘Try as best as you can to get the children back to school, but one size does not fit all.’”