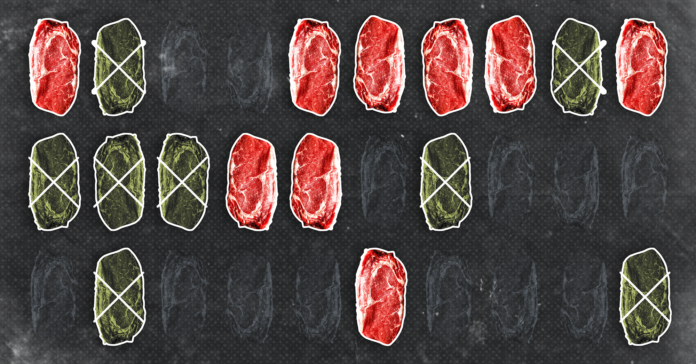 The steak stakes are high in Texas.

As of Tuesday, the Department of State Health Services will be investigating outbreaks at two of Texas’ meat packing plants.

Tyson Foods, along the Texas-Louisiana border, and JBS Beef, in the Panhandle, have both, over the course of the month, seen outbreaks in their rural facilities.

Earlier in April, Tyson Foods experienced an outbreak among several of its employees. The Department of State Health Services discovered 14 coronavirus cases and two related deaths tied to the facility’s outbreak, according to the Texas Tribune.

Following an outbreak at its slaughterhouse in Colorado, JBS Beef saw another occurrence at its packing plant in Texas’ Moore County. While the total number of cases is unknown, the county’s per capita rate of confirmed cases has surpassed Shelby County and is the second highest in Texas.

In response to the recent outbreaks, both Tyson and JBS Beef have made statements regarding future protective procedures.

The JBS Beef facility in Moore County stated on its Facebook page that it will be working closely with county officials in regard to the recent outbreak.

And while Tyson stated on its Facebook page that it will be closing its facilities through Monday, no mention was made of the outbreak.

There are 32 meat processing plants in the state of Texas, and while a number are in urban areas, the majority are in rural parts of the state that are particularly unprepared to deal with an outbreak.

In the past decade, Texas has led the nation in the number of rural hospital closures, making up nearly one fifth of all closures across the United States. This has left more than a quarter of Texas’ 3 million rural residents looking farther for emergency care. In the instance of a rural outbreak many Texans would have to go farther for care.