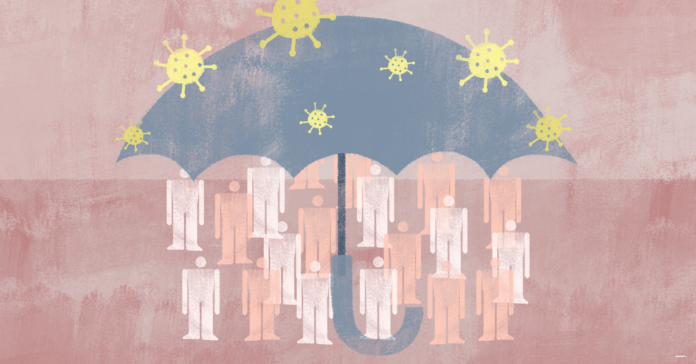 Herd immunity has been receiving a lot of attention lately as strategies evolve on how to safely ease stay-home rules while we do not yet have a COVID-19 vaccine.

There are two ways to safeguard the long-term well-being of people through herd immunity. There are natural immunity and vaccination, said Dr. Robert Atmar, a professor in the infectious diseases section at the Baylor College of Medicine.

A lot of research on possible vaccines is ongoing, but that work takes time. Without a vaccine, other means to develop herd immunity can be considered, but they carry risks.

“At the present time, the only way that herd immunity might be achieved is that a sufficient number of the population has become infected and developed immunity after that infection,” Atmar said.

Generally, an 80% immunity rate in a population is required for herd immunity, according to Dr. Jan Patterson, a professor of medicine in the division of infectious disease at UT Health San Antonio.

The number, or critical mass, for effectual COVID-19 herd immunization varies. A definitive figure has not been determined, Atmar said. Diseases like measles need for more than 95% of a population vaccinated to mitigate transmission.

“We don’t know … what percentage of the population that would be. I’ve seen numbers that range between 30-70%. I think probably it would be more like 50-70% to have at least some herd immunity,” he said.

In a news briefing on April 17, World Health Organization emergency expert Mike Ryan said current information suggests that a low percentage of the population has produced the antibodies.

“There’s been an expectation maybe that herd immunity may have been achieved and that the majority of people in society may already have developed antibodies,” Ryan said. “I think the general evidence is pointing against that and pointing to a much lower seroprevalence (cumulative exposure to infection).”

The Scandinavian Journal of Infectious Diseases reported in 2011 that there is a void in our knowledge regarding the best way to attain herd immunity.

A gradual build-up to a safe percentage of immunity is important, Patterson said.

A herd immunity strategy employed over a period of time would be highly dependent on the infection rate within a population, Atmar said, adding that the social distancing policy and the flattening of the curve are not intended to reduce the infection rate but to permit the nation’s health care system to catch up and alleviate the pressure that has been placed upon it; the outcome enables the system to increase the likelihood of recovery for patients suffering from the virus.

The goal is to buy some time, thus allowing for the emergence of better treatment strategies whether it be an antiviral or immunomodulator (chemical agent), he said.

If someone “gets sick in September, we may know better how to treat them than we know now so their chance of survival will be higher once we have those … effective therapies identified,” Atmar said.

There is an alternative in relation to natural immunity. Return to normal now and let as many as people as possible become infected, greatly expediting the herd immunity process. However, this method could cause a significant amount of collateral damage, Patterson said.

“This could put a lot of people at risk since a large number of infections would result in some people with severe disease and some deaths,” she said.