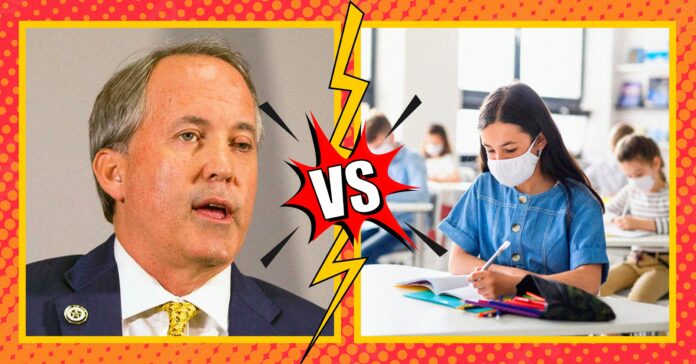 In his latest attempt to fulfill Governor Abbott’s wishes, Ken Paxton has let himself take the spotlight through the threats he directed on social media towards school districts enacting mask mandates to keep children safe.

Some 85 school districts and six counties have instituted mask mandates of some kind in defiance of Abbott’s ban — citing the need to protect school children too young to get the vaccine amid the spread of the highly contagious delta variant of COVID-19, as reported by the Texas Tribune.

The legal battle led by Abbott and Paxton, which has not only caused statewide confusion for teachers, parents, and local authorities but ultimately resulted in Abbott’s approval rate significantly dropping, has now opened a new obscure path.

Despite navigating a worrying increase of covid-19 cases in children, the mourning of teachers passing due to the virus, and having to face the educational gap left by a year away from the classrooms, schools now face the possibility of losing huge amounts of resources and energy to Paxton’s Office.

“Not only are superintendents across Texas openly violating state law, but they are using district resources—that ought to be used for teacher merit raises or other educational benefits—to defend their unlawful political maneuvering,” Paxton said in a statement. “If districts choose to spend their money on legal fees, they must do so knowing that my office is ready and willing to litigate these cases. I have full confidence that the courts will side with the law – not acts of political defiance.”

Paxton has filed the lawsuits despite having previously argued in court documents that neither he nor Abbot actually have the power to enforce the governor’s ban.

Schools, however, will fight back.

“I’m not interested in politics. I’m focused on taking care of kids, and that includes doing what we can as a school district to prevent COVID-19 from spreading in our schools and other facilities” said Waco ISD Superintendent Dr. Susan Kincannon “We’ll continue to consult with medical experts and monitor both public health and legal developments. For now, though, we will also continue to require masks inside all Waco ISD buildings.”