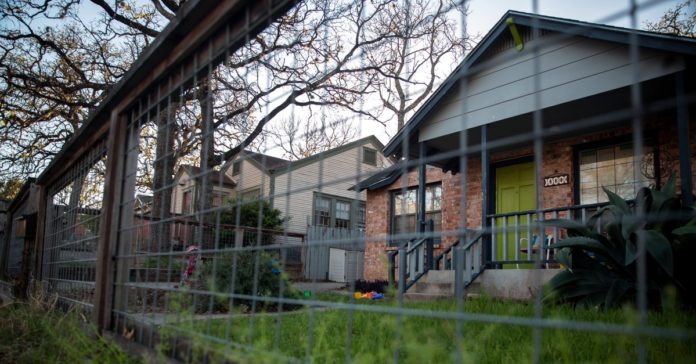 The public health and economic crises wrought by the coronavirus have upended the financial lives of more than 1.5 million Texans, leaving an unknown number to accumulate a backlog of bills as they wait out the pandemic with smaller paychecks or no income at all.

Although overlapping local and statewide eviction moratoriums meant to keep people in their homes have been extended as the COVID-19 crisis drags on, some big cities are going a step further to financially help residents by providing rent and mortgage relief.

But officials and advocates say the programs aren’t expansive enough to see Texans through the pandemic.

“We anticipate the need for assistance to pay May rent will be far greater than the funds available,” the website for Austin’s $1.2 million rental assistance program reads.

To avoid panic and ensure eligible Austinites get an equal shot at the limited funds, the money will be awarded through a lottery system after the portal closes Wednesday.

The overwhelming demand for the programs comes from residents of a state where nearly half of households that rent were already paying more than 30% of their income to landlords, a percentage that classified them as moderately or severely cost burdened even before the economic downturn began.

The vast majority of Texas cities have no housing assistance programs in place, and for the few that do, the need is greater than the funds can support.

Sandy Rollins, executive director of the Texas Tenants’ Union, likened the situation to small businesses not being able to qualify for the federal Paycheck Protection Program before money ran out.

“I think a lot of people might not be able to get through,” she said.

San Antonio rolled out a sweeping $25 million program April 23, with applications for rent and mortgage assistance open through July. As of Tuesday, the city had received 5,652 applications. If approved, the funds would total over $10 million, a spokesperson told The Texas Tribune — just over 40% of the program’s budget.

In Dallas this week, the city’s application portal was quickly overwhelmed by the influx of hopefuls, many of whom reported that the page wasn’t loading or crashed mid-application, according to The Dallas Morning News.

The city received applications from more than 16,000 households on the first day that renters and homeowners could seek help from its $13.7 million program, the paper reported. Eric Anthony Johnson, the city’s chief of economic development and housing and neighborhood revitalization, previously told the Morning News that the city’s program would be able to help about 1,000 households.

“We’re going to do what we can do, and hopefully other sources of funding start to emerge,” he said.

Notably, Texas’ most populous city, Houston, has not implemented a similar program despite advocates’ calls for a $100 million rental and utility assistance fund. However, the City Council will consider a $15 million program Wednesday “to provide Houston’s low-to-moderate income residents rental assistance in the wake of the COVID-19 economic fallout,” Mary Benton, the mayor’s communications director, told The Texas Tribune in an email.

The National Low Income Housing Coalition found that $100 billion in federal rental assistance is needed to cover all “extremely and very low-income renters” during the pandemic. The Texas Tenants’ Union, along with 40 other housing and community organizations from across the state, signed on to a letter urging the Texas congressional delegation to support the $100 billion fund along with a national eviction moratorium.

“Although Texas has a statewide moratorium on evictions through May 18, tenants who are unable to pay will face a rent backlog and explosion of debt when eviction hearings resume,” the letter reads. “Congress must step in now to provide substantial housing resources to prevent mass displacement, and chaos in rental markets and city budgets.”

In addition to assistance, Texas must require landlords to give tenants an opportunity to cure a default, Rollins said. While Dallas and Austin have put ordinances in place that give renters a grace period during which they can pay back late rent, there is no similar statewide protection.

“Right now landlords are in the position to call the shots,” she said. “You know, ‘You defaulted and I want you out. And I don’t want the city’s money and I don’t want you.’”

“We’ve got 254 counties, countless cities in many of those, and so clearly this would be better if there was a statewide approach to it, if this could be included in an order from Gov. Abbott,” Rollins said. “However, he’s already opening up the economy. I’m not sure what we can expect there.”

Zoe Middleton of Texas Housers, another group that signed on to the letter urging the Texas delegation to act, echoed the sentiment.

“Ideally, there’d be a coordinated response to stabilize tenants at the state or federal level,” the southeast co-director said in an email. “Sadly, the political will just isn’t there.”