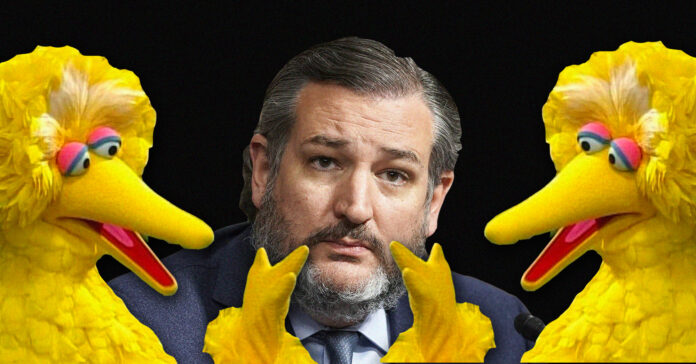 Texas’ stellar Senator continues his strike of questionable statements, first, he defended using a nazi salute as a sign of protest in a school board meeting, now he’s fighting a classic children’s character: Big Bird from Sesame Street.

Since the use of Pfizer’s COVID-19 vaccines was approved to be provided for children a large number of anti-vaxxer groups raised their voices against it, and well Ted Cruz seems to be joining them. This week, the vaccines will become available for kids between 5 and 11 years old. This is the first chance for parents to vaccinate their children and give them the protection recommended against the virus. The White House estimates almost 1 million kids will receive their first dose of the vaccine in the first week.

In order to help and encourage kids to receive the vaccine, some cartoons and characters from renowned TV shows are commenting on the matter. Big Bird, one of the main characters of Sesame Street, a beloved show that has been running for over 50 years and is known by virtually everyone in the country, commented on Twitter on the importance of vaccines, and one of its side effects so kids don’t get scared before receiving the shot.

However, even as America is fighting to get over the pandemic by vaccinating all eligible people, some of its politicians continue to block all efforts made and continue to spread misinformation to generate confusion and distrust for the vaccines. In this case, it came to one of the lowest points seen during this year. Sen. Cruz from Texas replied to the tweet posted by Big Bird (a fictional character) and called him out for “government propaganda”.

The USA is still struggling with the pandemic, it has already taken the lives of nearly 800,000 Americans. But even as solutions start to arrive, Ted Cruz refuses to support actions against the virus.