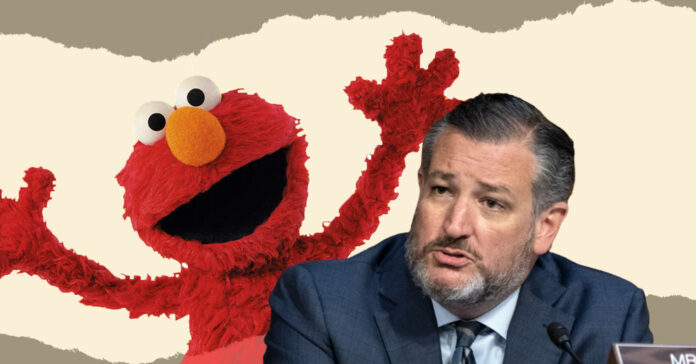 A 3-year-old red puppet was setting the example for little kids by getting a Coronavirus vaccine in a commercial when Ted Cruz scolded him on Twitter for not citing any scientific evidence.

“Thanks, @sesamestreet for saying parents are allowed to have questions! You then have @elmo aggressively advocate for vaccinating children UNDER 5. But you cite ZERO scientific evidence for this” the Texan senator posted on a tweet.

In the commercial poor little Elmo was being congratulated by his dad after getting vaccinated. “You were super duper today,”  He said, to which Elmo responded, “there was a little pinch but everything was ok”.

Ted Cruz slammed at the yellow furry six-year-old puppet for getting vaccinated in a commercial when the turn of six-year-old kids arrived. He qualified the commercial in which parents were invited to ask their doubts to a pediatrician as “government propaganda”.

This month the Food and Drug Administration approved the vaccine for kids under five to prevent contagions, despite some Republican members’ concerns. The two vaccines are from the brands Pfizer and Moderna and will be placed in smaller doses.

The American Academy of Pediatrics -an organization that collaborated on this commercial- stated that since the beginning of the pandemic 13 million kids have been infected with coronavirus and that’s why it’s important to vaccinate kids of all ages.

Sesame Workshop, the nonprofit educational organization behind Sesame Street, said in a statement that the commercial is part of a series of resources for parents with questions.