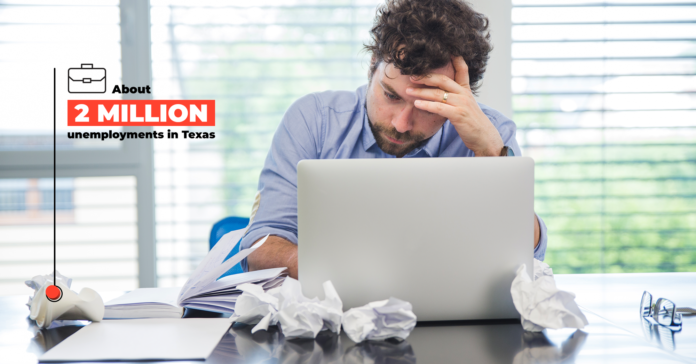 The number of Texans on unemployment is now hovering around the 2 million mark. Another 134,381 first-time claims were filed in the Lone Star State last week. While that continues the downward trend that began a couple of weeks ago, it is still far above the average weekly filings before the pandemic. It is also believed to be an underrepresentation of what is really happening because there are still widespread reports of people who have been unable to access the Texas Workforce Commission’s overwhelmed system.

Nationally, there has also been a slowing of first-time claims. There were 2.4 million Americans filing first-time claims last week, for a total of about 38 million since the pandemic began. That brings the nation’s unemployment rate to around 17%. In comparison, unemployment hit just under 10% in 2009 at the height of the Great Recession and 24.9% in 1933 during the Great Depression.

On a bright note, Texas is among five states experiencing the largest decreases, which could be a reflection of reopening steps that have been implemented in the last couple of weeks. Other states experiencing declines are California, Oklahoma, North Carolina and Missouri.

Essential workers who are already on the subsidized plan will continue to receive child care for the three month period they were initially approved for under this program. No new applications are being accepted.

Lack of access to child care is considered a good reason for refusing to return to work. Gamez said that reason will be considered on a case-by-case basis.

“With child care facilities now allowed to reopen, we would continue to take claimants at their word, absent facts to the contrary, and would review the work refusal around lack of child care to determine benefit eligibility” said Gamez in briefing on social media Wednesday.

Texas unemployment recipients have also been put on notice to prepare to have to begin job searches again. It hasn’t happened yet, but Gamez has previously indicated it is coming. He has also said there will be advance notice.

The $2 trillion federal stimulus bill includes an additional $600 a week in unemployment benefits for four months and aid for freelancers and others who do not usually qualify for unemployment assistance. In addition, there is financial help available for the self-employed.

If your last job was for a temporary agency or staff leasing company, you may still qualify, but there are additional requirements.

Number of hours worked and pay rate if you worked the week you apply for benefits (Sunday through Saturday).

Information about the normal wage for the job you are seeking.