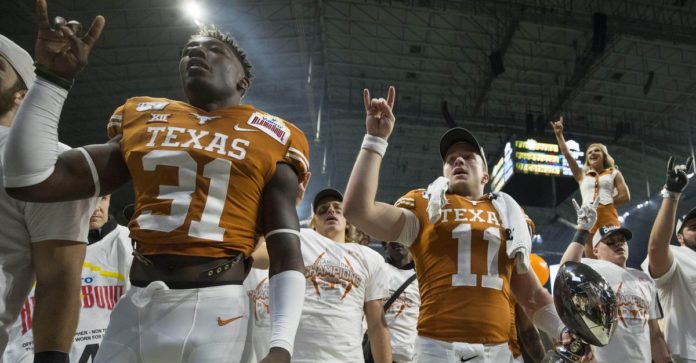 The University of Texas at Austin’s final football game of the regular season, against the University of Kansas, has been canceled because of a COVID-19 outbreak infecting nine players and 13 staff members.

“We are pausing all football team activities and shutting down football training facilities to get a COVID-19 spread among our football program under control,” Chris Del Conte, UT-Austin athletic director, said in a statement.

In addition to those who are sick, there are 14 other players and 15 staffers in quarantine due to contact tracing. UT Athletics did not respond to requests for additional information about the recent outbreak among the football team.

“We will continue daily testing, monitor the situation and adhere to all of the medical team’s health and safety protocols as we move forward with an abundance of caution in this situation,” Del Conte said.

This fall, college football schedules across the state and country were repeatedly disrupted as programs struggled to keep students and staff members safe from the virus during the contact sport. In June, 13 UT-Austin athletes tested positive for COVID-19. Texas Christian University and Southern Methodist University postponed a game in early September. Baylor University has had to postpone a game and briefly paused football-related activities to stop the spread of the virus.

The UT-Austin game against Kansas had already been rescheduled due to an outbreak on the Kansas team last month. The game is declared a “no” contest and won’t be rescheduled. It’s the only game Texas did not play this fall amid the pandemic.

Earlier this week, Texas A&M University’s rescheduled game against The University of Mississippi was also canceled this week due to a combination of positive tests and contact tracing on the Ole Miss team. The game could only be rescheduled if Ole Miss and Texas A&M’s games on Dec. 19 are also canceled.

“We’ve stressed throughout 2020, and it’s a great lesson about life, control what you can control. It’s unfortunate we are unable to play Ole Miss this week,” said Aggie Coach Jimbo Fisher in a statement. “I feel for our seniors who were looking forward to being recognized and playing at Kyle Field. We will go back to work controlling what we can, and that is preparing to play Tennessee next week.”

Texas A&M’s game against the University of Tennessee was also rescheduled from earlier this season after an Aggie player and staff member tested positive for the virus in November.