Home Coronavirus How and Why Gov. Abbott Took Up the Cause of a Dallas...
Facebook
Twitter
Email 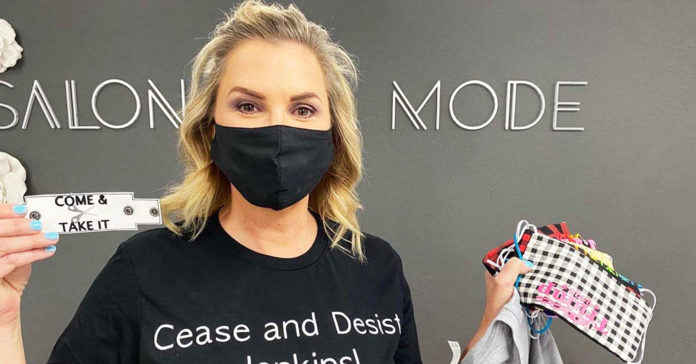 Without a playbook for managing a pandemic, Texas’ elected leaders have been forced to improvise on the fly.

Such was the situation for Gov. Greg Abbott in responding to a law-breaking Dallas hairdresser.

Trying to balance public health and safety with mounting joblessness and a ballooning economic crisis, Abbott’s reopening plan for Texas landed him in hot water, leaving him to untangle a very public brouhaha that was the result of his own policies.

Abbott’s announced plan for a phased-in reopening of non-essential businesses riled Dallas salon owner Shelley Luther, whose type of business was not on Abbott’s list for initial openings. In a move that many have said was orchestrated by the ultra-right, Luther defied orders to do otherwise and reopened Salon a la Mode.

Luther’s actions didn’t escape the notice of Dallas County officials, who sent her a cease and desist order, which she ripped up in front of a crowd and television news cameras at a rally organized by the conservative grassroots organization  Open Texas.

The rally, similar to others around the country, was organized to protest shutdown orders and other government mandates, such as wearing masks, which protesters view as heavy-handed intrusion into their civil liberties.

The spotlight on Luther broadened during a virtual court hearing, where she was sentenced to a week in jail and fined $7,000 by state district Judge Eric Moye for disobeying an order to close her salon. Moye gave her the chance to avoid jail time if she apologized and committed to not re-opening her salon until she was allowed to do so lawfully.

Luther refused and Moye moved to implement the rule of law, which dictates that actions have consequences.

Luther’s case became a national fixation as she was booked into the Dallas County Jail, only to be released a day later after intervention by the Texas Supreme Court.

Abbott’s response was to revise his reopening game plan. First, he moved up the date for hair and nail salons to re-open and then eliminated jail time as a penalty for flouting rules meant to slow the spread of the deadly virus.

Since the ordeal unfolded, there has been speculation about whether Luther was sincere in her intentions or whether she was recruited by far right leaders to be the face of civil disobedience against government overreach during the pandemic.

After all, it was Texas’ most conservative top leaders who rushed to her defense.  U.S. Sen. Ted Cruz made a trip to Dallas for a haircut at Luther’s salon and Lt. Gov. Dan Patrick offered to pay her bail and serve her jail sentence from his home.

But the strongest indication Luther’s protest might not have been organically grown was the timing of a GoFundMe campaign on her behalf that was created the day before she illicitly re-opened her salon.

Even if Luther was more of a pawn than a person in power, her case brought widespread attention to the grievances of disgruntled business owners and Americans who need to make a living or get a haircut.

To many, Abbott’s response appears hypocritical. To many others, it was a political risk he was willing to take.

“The political pressure to change the policy came from both the business-friendly center and libertarian right of the Republican Party,” said Brandon Rottinghaus, professor and Pauline Yelderman Endowed Chair of political science at the University of Houston.

“The business-friendly center worried that enforcement of business owners would be too severe and the libertarian right wants to open with no strings attached.  The order couldn’t survive the amped up conservative backlash to the stay-at-home orders,” he said. “The problem for the state and the governor isn’t the change in punishment for violating the law but the perception that the rules won’t be enforced at all.  This might lead businesses to push farther than the law allows.”

“Abbott always has his antenna when it comes to anyone trying to move to his right, especially Cruz or Patrick,” Jillson said. “When the far right got up and started protesting against his order, he knew he had to do something or he would become politically vulnerable.”

How all this might impact his political future is a matter that only time will tell.

“The left views him as playing favorites, and the right thinks he is a paper tiger,” Rottinghaus said.  “Whether a legal misstep or a political calculation gone wrong, the governor took heat from all sides.”