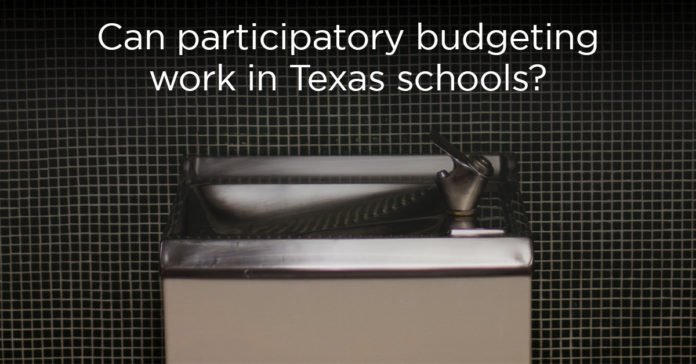 New water fountains and water bottle refill stations at a Dallas high school is hardly headline news, but these amenities represent a major step forward in the decision-making process for the way money is spent in Dallas schools.

The decision to spend $2,000 on the fountains and refill stations at North Dallas High School was the result of a pilot project in participatory budgeting, a grassroots initiative aimed at engaging communities to have a say in how money is spent in their schools and neighborhoods.

The pilot project at North Dallas High, where 92 percent of the students are low-income, was the first endeavor to introduce participating budgeting in the Dallas Independent School District.

But it won’t be the last.

The Dallas ISD school board recently approved a district-wide pilot, allocating $60,000 to be divvied up in $20,000 increments to three winning projects nominated by high school students and judged by a council of their peers.

The money for the North Dallas High pilot project came from a private donation from a school alumni group and was supported by the Texas Organizing Project, a nonprofit organization that strives to improve the lives of low-income and minority residents through community engagement, advocacy and voter participation.

The DISD pilot project is funded with public money from the district’s nearly $2 billion 2019-20 budget.

“The district wasn’t involved in the North Dallas High School project, but it was successful and an example of how participatory budgeting works,” said Jose Perez, an educator justice organizer for the Texas Organizing Project.

For the North Dallas High pilot, an independent study math class took the lead in surveying students on ways to spend the money, analyze results and facilitated a vote to choose a winner.

The Texas Organizing Project also spearheaded the push for the district-wide pilot project as well as buy-in from the administration and school board on participatory budgeting, Perez said.

Although the school board unanimously approved the pilot project and $60,000 allocation, some board members expressed reservations about outside organizations influencing how district money is spent.

“That is not our intent,” said DISD Chief of Staff Pamela Lear. “What we are looking at is students councils driving this, along with a teacher, principal, counselor….,” The Dallas Morning News Reported.

The district’s Teen Board, comprised of student council presidents from the district’s high schools, will anonymously rank the proposals submitted to select the top three.

The pilot was hailed by parents like Domonique Givens as a “A community win, an organizing win and an example of democracy in Action,” The Dallas Morning News reported.

Selection of the three projects is expected soon.

“Our hope is that the projects selected will be at schools in underserved communities that in the past have gotten the cold shoulder from the district,” Perez said.

Besides Dallas, the Texas Organizing Project operates offices in Houston and San Antonio. The Dallas office is most focused on education and has taken the lead in Texas in pushing for participatory budgeting in K-12 schools. Other areas the organization targets include criminal justice, healthcare, immigration and strengthening low-income neighborhoods.

Participatory budgeting began in Brazil in 1989 as an anti-poverty initiative, which resulted in a 20 percent reduction in child mortality.  Since then, participatory budgeting has spread to about 3,000 cities worldwide and its influence has helped shaped budgetary decisions for states, counties, cities, school districts and other government authorities.

The Participating Budgeting Project formed in 2009 to advance participating budgeting in the United States and Canada. The nonprofit’s work has involved more than 400,000 people in budgetary decision-making of $300 million in public money in 29 cities.

According to the organization’s 2018 annual report, it’s biggest achievement last was a commitment from New York City Mayor Bill de Blasio to include participatory budgeting in all of its more than 400 public high schools across the city through its “Civics for All “ initiative.