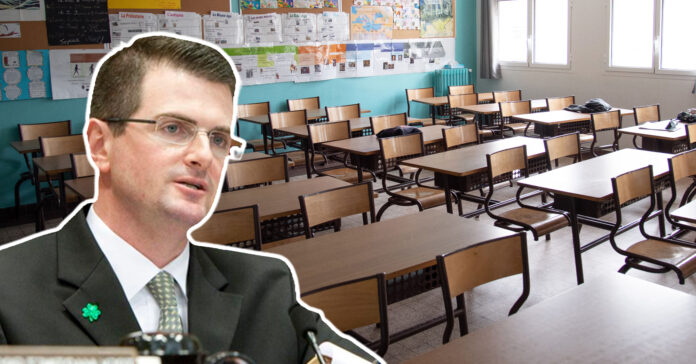 State Sen. Brandon Creighton (R-Conroe) may not be a household name in Texas but is one of the chief enablers of Lt. Governor Dan Patrick’s far-right agenda. Expect to see him in headlines very soon as the conservative war on education ramps up.

This week, Patrick announced some shake-ups in the legislature regarding education. The Committee on Higher Education was demoted to a sub-committee underneath the Committee on Education. Pending the next legislative session, Creighton was boosted to be the chair of the Education Committee while also still holding his position on the sub-committee.

“I have had extensive discussions with Sen. Creighton and his team about handling these important assignments and I have full confidence in him and his team. They will do a great job,” said Patrick in a statement.

Yawn-inducing as that explanation of events may be, it may have some dire consequences for the state. Creighton has had a long history of nudging through many of Patrick’s more extreme agenda items. For instance, he was hand-picked to be on the Special Committee on Constitutional Issues, an innocuous-sounding body that was specially created to pass universal carrying on firearm in the state. He was the lead sponsor of the bill that eventually passed, and for his work was honored by the lobbying arm of the National Rifle Association.

In education, Creighton was one of the main voices pushing through the bill to limit the teaching of white supremacy and its impact on history in Texas schools. Fighting for the bill in May, he asserted that curriculums should focus on “traditional history, focusing on the ideas that make our country great and the story of how our country has risen to meet those ideals.”

Creighton apparently has big plans for reforming the Texas education system in the future. Having enabled the strangulation of progressivism in public education, he appears to be moving on to one of Texas Republicans’ favorite issues: school choice. Essentially, Texas Republicans are keen to let public funds go to private schools, which often teach religious materials and forego lessons on non-white races.

The senator spoke at Bob Hope Middle School earlier this year on the subject of school choice. He said that he is looking forward to furthering the choice agenda when the legislature reconvenes next year.

“We should have the strongest parents bill of rights in the nation for education,” he said, then added that it was important for parents to have alternatives in public education.

From his work so far, it’s clear that Creighton is looking for different ways to strangle the teaching of social justice to Texas children. From the misnamed “critical race theory” bill to school choice to his apparent support for ending tenure in Texas public universities, he is deftly paving the way for a separate-but-equal education system where conservative disinformation can be taught as fact while progressivism is censored. The scariest thing about it is that so far he has been very, very effective carrying out Patrick’s orders.