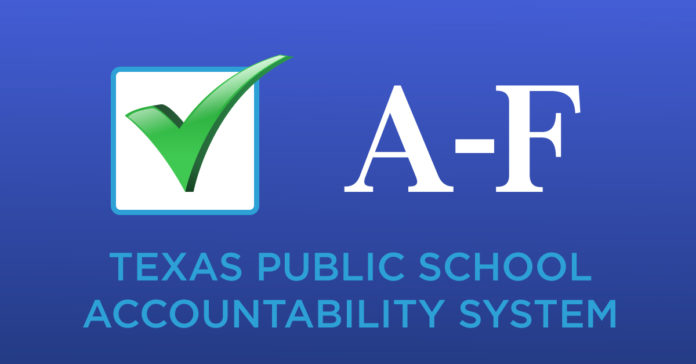 To understand how the state “grades” schools, it’s helpful to know what each of these areas entails.

Student Achievement—what students know, and what they can do

School progress is measured by improved performance on state exams and comparisons based on similar districts and campuses. Schools can get credit for meeting or exceeding previous goals.

This score is derived from the performance of certain groups of students and their success in academic achievement, federal graduation/growth status, English language proficiency, and school quality/student success. If these student groups reach the achievement targets, the school can get credit for that improvement. This section makes up 30% of the overall rating.

The TEA’s scoring guide chart notes that after calculating each subsection, an average will follow the equation, which leads to the designated letter score:

What do these ratings mean for schools?

Unless a campus is given an F rating, schools and school districts work internally to raise their scores. If a school is graded “F,” the TEA intervenes; five consecutive years of F ratings could result in campus closure or the installation of a board of managers to replace the elected school board.

Failing schools must notify students’ parents/guardians, follow specific directives from the commissioner, and allow consistent visitors and oversight from the agency.

While some education advocates say the TEA rating system is not a good representation of the work education professionals are doing, others stand by the ratings as holistic scoring systems.

Beto O’Rourke Says It’s Time To Get Rid Of The STAAR...

Austin Teachers Get “Priced Out” of Their Homes