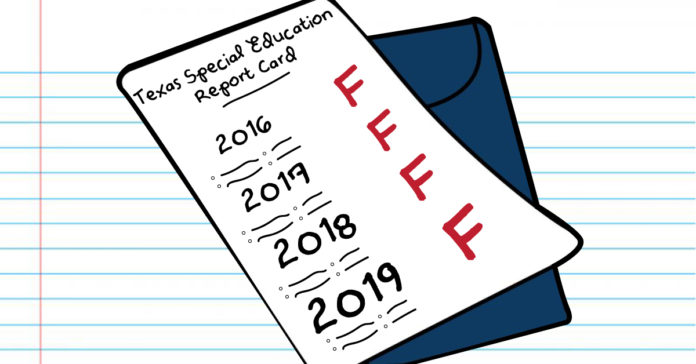 Texas students who receive special education services continue to get the short end of the stick, despite the state’s claim to focus on education reform in the last legislative session.

For the fourth year in a row, Texas failed to meet expectations for special education services as determined by federal law. Since 2016, Texas has earned the same rating of “needs assistance” in relation to compliance with the Individuals with Disabilities Education Act (IDEA), set by the U.S. Department of Education.

The United States Office of Special Education and Rehabilitative Services sent a letter in June to the Commissioner of the Texas Education Agency, Mike Morath, with details the failing rating. The OSERS determines the rating based on a combination of participation, statewide assessments, and high school graduation and drop out rates among students with disabilities.

IDEA requires early interventions and services for students with disabilities, which includes students diagnosed with autism, dyslexia, emotional disorders and speech impairment, among others. Deputy Commissioner of Special Populations at the Texas Education Agency, Matt Montaño, told the Houston Chronicle the TEA is “not satisfied with this identification,” but legislators and state officials have yet to find a solution to the ongoing problem.

While Texas legislators allocated more money for education this session—including a portion that will go specifically towards students with disabilities—thanks to an amendment to the house finance bill by Representative Mary E. Gonzalez (D-Clint), it’s not clear how the state plans to reverse this trend on the ground in school districts.

In 2018, the federal government determined the state had violated federal laws for years by capping the number of students granted access to special education services. This scandal led  to parent protests and hearings calling for swift change to the system. Gov. Greg Abbott and Education Secretary Betsy DeVos both made statements condemning the actions of the Texas Education Agency.

The state leadership may have required an education funding overhaul this session, but the federal government has mandated an overhaul of the state’s special education system. In October 2018, state education officials revealed that mistakes and misjudgements would likely cost the state around $223 million, including over $100 million they would have to pay back to the federal government.

Until there are more elected officials willing to stand up for Texas children in special education, these problems are likely to continue, a clear sign that our education system isn’t the only thing that “needs assistance.”