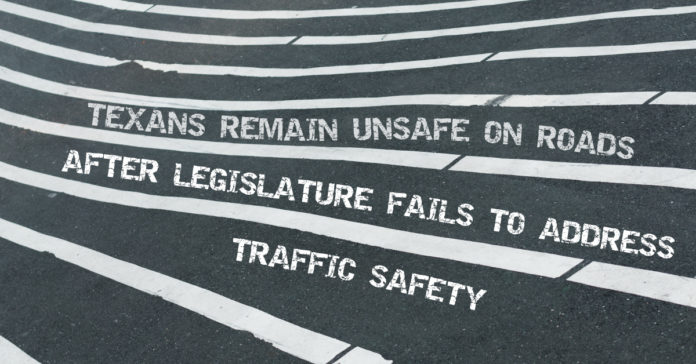 Texas leads the nation in traffic deaths, yet little was done by the Texas Legislature this year to address the issue.

In 2016, the Texas Traffic Safety Task Force released a report on potential solutions to reducing traffic deaths and injuries in Texas. This included investments in infrastructure such as rumble strips, improvements to traffic management systems, driver safety education campaigns, and laws to allow automated speed enforcement among others. In 2017, the Legislature did little to act on them. In 2019, not much has changed.

Bills to strengthen laws on distracted driving failed this year. In 2017, the Texas Legislature passed a texting while driving ban, a measure law enforcement has since cited as difficult to enforce.

A bill to improve pedestrian and cyclist safety by defining a safe distance for passing between a motor vehicle and a pedestrian or a person on a bicycle failed this year. Another bill to update Texas transportation code to require vehicles to stop and then yield for pedestrians did not even receive a hearing. Current law only requires vehicles to yield.

Several bills to lower the speed limits in residential neighborhoods from 30 mph to 25 mph failed. Nothing was done to reduce the number of high-speed corridors on Texas highways, which are some of the deadliest in the nation.

The few bills that did pass related to traffic safety were a ban on red light cameras, a form of automated enforcement intended to reduce deadly T-bone crashes, allowing charter schools to establish school zones to lower speed limits around them, and an unfunded mandate to local municipalities to put signage at the end of construction zones to show the upcoming increased speed limit.

After failing to get traction with the Legislature, advocates are now turning to the Texas Transportation Commission for policies to save the lives of Texans on our roads.

In late May of this year, the five-member Commission mandated the Texas Department of Transportation to “work toward the goal” of halving traffic deaths by 2035 and eliminating them entirely 15 years later. Based on lackluster support among legislators, it’s unclear how a plan without implementation will do what’s necessary to curb the rising rates of death and injury on state roads.
Texas is notorious for its dangerous roads, especially in its large urban cities like Houston. Not only does the culture of high speed need to change in Texas, but policies and laws to support safe driving need to be implemented to save thousands of lives lost on Texas roads every year.